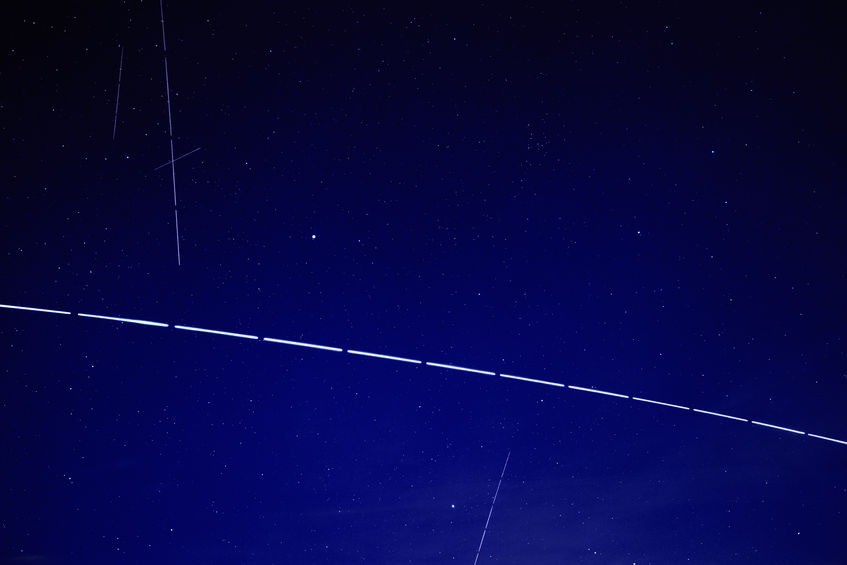 A string of SpaceX Starlink satellites visible in the night sky

Elon Musk’s SpaceX have begun testing their Starlink broadband service in the English countryside, a technology which could prove transformative.

SpaceX aims to blanket Earth with high speed broadband coverage that could prove revolutionary in rural parts of the United Kingdom.

Primitive versions have been available to those who live and work in the most poorly connected regions for a few years, but these options have tended to deliver unreliable coverage and low latency.

Elon Musk, who earlier this year became the richest man in the world, founded SpaceX in 2002 as a manufacturing and space transportation company.

In 2015 they created the subdivision Starlink which plans to deliver their global broadband service.

In November Starlink were granted a licence by UK telecoms regulator Ofcom which allows them to sell the satellite dishes and other communications equipment that pick up the signals emitted by their satellites.

The extent of the network is unprecedented, whilst the technology is considerably more advanced than earlier satellite broadband options.

The satellites will beam high speed, low latency broadband to the ground, meaning a faster and more reliable service for users.

The satellites will create a network that is in low orbit, just 340 miles from Earth’s surface, compared to current satellite internet which uses spacecraft more than 22,000 miles from the surface.

This is one of the primary reasons that Starlink are expecting to deliver a far better quality of internet.

The company’s website claims that they want to create ‘near global coverage of the world’ by the end of this year.

Currently enough satellites have been set up for a ‘beta’ service to be provided in northerly latitudes which has meant Starlink have been able to start trialling the service in the UK.

People living in specific areas have been invited to try out the service: those who have had this opportunity have reported that the service is straightforward to use and simply made up of a Wi-Fi router and a small satellite dish.

Musk said in November last year: “Right now it takes about five minutes to set up, but with future improvements probably about three.

"No technical knowledge is required, it just needs to be pointed at the open sky and plugged in."

SpaceX is not the only company driving the advance in satellite broadband: OneWeb are a company that are part-owned by the UK government and are Starlink’s closest competitor, they aim to have 648 satellites in orbit by the end of 2022 and an eventual constellation size of 7,000.

This is still a long way behind the extraordinary targets of Starlink, who already have permission to launch 12,000 satellites and aims to have an eventual 40,000 strong network, pending approval from the UN backed International Telecommunications Union.

Could this improve rural business?

Much of rural Britain is crippled by poor broadband connectivity: the UK is 47th in the world for average broadband speed, but many remote areas struggle to get close to that.

Last year an NFU survey of mobile and broadband connectivity showed that 30% of farmers have broadband speeds below 2 Mbps.

And just 17 percent have access to speeds which are above 24 Mbps, compared to 96.5% of the overall population.

Starlink say that their broadband will offer speeds between 50 and 150 Mbps, with reports from customers piloting the service confirming they are consistently getting download speeds of around 80 Mbps.

It is consistency that is key. Dr Jane Atterton, from Scotland’s Rural College (SRUC), is an expert in rural business and policy, she said: “For rural businesses it is not just about the speed of broadband access but also reliability, which is arguably more important.

"You do not want a connection that will suddenly drop out when you are in the middle of a payment transaction or a video call.”

It is reliability that satellite broadband should bring: using 4 and 5G are common solutions for those in poorly connected areas, however these lack range and suffer similar coverage issues to broadband, with outdoor coverage of 4G services at just 66%.

Starlink are currently charging their UK customers £439 for the satellite dish and other communications equipment, with a regular monthly fee of £89 and an additional £54 shipping fee.

This pricing is clearly targeting customers with a lack of other options, but despite the steeper price and not reaching the super high speeds that can be accessed by fibre optic, the technology could nonetheless prove transformative.

It is possible that a considerably improved internet connection in the countryside, twinned with the effects of the Covid pandemic, could persuade firms to move out of major cities and use more satellite offices in rural areas.

With the pandemic forcing many people to work from home, many businesses are being led to question the large sums they spend on city centre office leases.

Dr Atterton said: “There has been a lot of anecdotal evidence of people moving out of city centres into rural areas during the pandemic.

The improvements in satellite broadband could open up parts of the UK that were never an option for businesses before.

“It is already a common trend that people in their fifties take early retirement from a job in the city and start small businesses in the countryside," Dr Atterton explained.

"However, there is limit to which rural areas people move to. For example, in Scotland people might already be moving into rural areas around Edinburgh, but an island off of the west coast is less attractive for them."