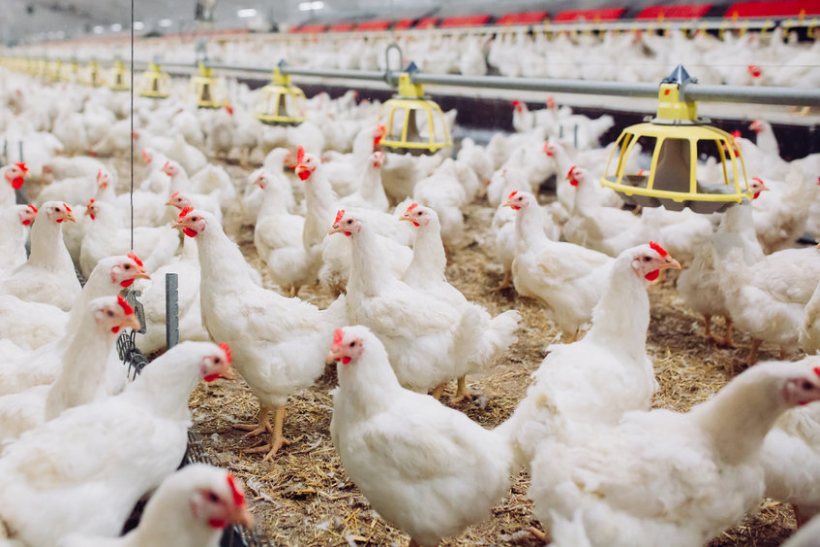 A study has refocused attention on strategies for reducing ammonia emissions in the poultry sector, with farmers urged to adopt measures including good ventilation and litter and manure management protocols to lower levels.

A three-year European Innovation Partnership (EIP) Wales trial on two broiler farms looked specifically at the role additives may have in reducing emissions by improving gut health and flock performance.

The study produced no evidence that these were effective for this purpose – similar levels of ammonia were recorded in the control and treatment houses.

But project manager Jason Gittins, technical director for livestock at ADAS, says there are a number of other measures that farmers can put in place to tackle emissions.

Ammonia is a component of urea, which is excreted in poultry faeces; when that manure is exposed to air and to moisture, the gas is released.

Agriculture is a major source of ammonia, accounting for 87% of UK emissions in 2019; of this, 14% came from poultry production.

Poorly ventilated sheds will result in wet litter, he explains, which allows more ammonia to be released into the air.

The use of effective ventilation to optimise the in-house environment, and preventing condensation can increase litter dry matter content and so reduce ammonia emissions.

“As a result, litter condition is often drier, which makes conditions less favourable for the production of ammonia," he points out.

These systems typically pass exhaust air from the house through a liquid to capture the ammonia; the air released to the atmosphere then has a lower ammonia content.

Mr Gittins says reports have indicated that reductions in ammonia emissions of around 80% are possible using scrubbing systems, but the capital and operating costs are high.

Diets should be formulated based on amino acid requirements, rather than crude protein, he advises.

“Diet formulation should change throughout the flock cycle to ensure that the nutrient supply is closely matched to the birds’ ammonia acid and other nutrient requirements."

Manures should be contained in covered stores on impermeable surfaces. If field heaps are used, the surface area should be as small as possible: ‘A’ shaped, as this will reduce emissions, says Mr Gittins.

“A key issue is that wet poultry manure and litter can lead to higher emissions of ammonia and so the priority is to keep them as dry as possible, both during housing and afterwards.

“This can also increase its value per tonne as a fertiliser and reduce haulage costs and odour risks."

Manure applications should follow normal good practice: “This should include avoiding spreading during frost, snow and heavy rain and taking account of soil conditions at the time.

In free-range egg production, the move to multi-tier systems, rather than single-tier, is consistent with reducing ammonia, because of belt clean-out and frequent manure removal.

Keeping litter dry is key to reducing ammonia levels. Drinkers should be managed to prevent spillages – any leaks need to be identified and quickly resolved.

Keeping the health status of birds high will help to maintain litter in a drier condition.

“Birds challenged with disease and in poor health often produce wetter manure, which can result in higher ammonia emissions,’’ he says.