Start cracking down on sheep scab this summer 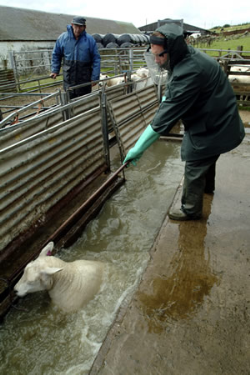 Flock managers trying to eradicate scab in their flock should consider an early summer OP plunge dip for blowfly strike prevention. This is because OPs also kill scab mites that persist on the body during the warmer months, argues independent sheep veterinary adviser Chris Lewis.

"Despite the loss of cypermethrin dips over environmental concerns, sheep farmers have a real opportunity this summer to crack down on an escalating scab problem. And if you use an OP dip in May, you will also have the added benefit of highly cost-effective blowfly control," Chris points out.

Now that cypermethrin sheep dips are unavailable, Chris Lewis recommends an industry switch back to OPs for scab and lice problems, particularly now that the introduction of genuinely closed-transfer systems – such as the water-soluble sachet-based approach favoured by Coopers Ectoforce – means dippers can no longer come into direct contact with the diazinon concentrate. "Since the advent of these systems, there have been no further human adverse reaction reports to the VMD," he says.

Sheep scab is a highly contagious disease that occurs in most areas of the country, and more commonly in the autumn and winter. But the condition can survive at a low-grade level all year round without effective control measures, he stresses.

"Scab mites can survive on some sheep over the warmer months in 'cryptic sites'. These are found in the groin, around the tail head, in the fissure near the eye, and in the ears. Then, when the temperature falls, the mites migrate back onto the body to produce clinical scab. As scab is highly contagious, these sheep then become a source of infection for the whole flock. It is often these sheep that are the most common cause of new scab outbreaks in apparently isolated flocks," Chris Lewis explains.

During the period of compulsory dipping between 1985 and 1989 when sheep had to be dipped both in the early summer and autumn, the incidence of scab fell dramatically to just 31 cases in 1989. At that stage the summer dip was dropped and a single winter dipping period was introduced. Scab cases then rose quickly and the disease has since become widespread.

At the same time, dipping to control blowfly strike reduced dramatically with the introduction of the pour-on insect growth regulator (IGR) cyromazine. But, Chris Lewis points out; cyromazine has no action on scab.

"For these reasons – and to ensure any residual scab mites are mopped up during the summer – it's well worth switching to a plunge OP dip as your preferred method of blowfly control this summer. But it's important to fully immerse the sheep twice to be sure of reaching the mites in the head region. OP plunge dipping should then be used again in the autumn to control scab pre-housing."

Schering-Plough Animal Health livestock veterinary adviser, Paul Williams, says that switching to a water-soluble sachet-based OP delivery system has environmental benefits too. "OP dip wash degrades in just eight days and is around 100 times less toxic to aquatic life. There's also no need for special disposal precautions for the packaging. Unlike with drums, the Ectoforce boxes and sachets can simply be recycled with your normal household waste – a big plus when you consider the challenges of drum disposal under the new Environment Agency on-farm tipping restrictions," he says.