Studies show no link between insecticide and bee health 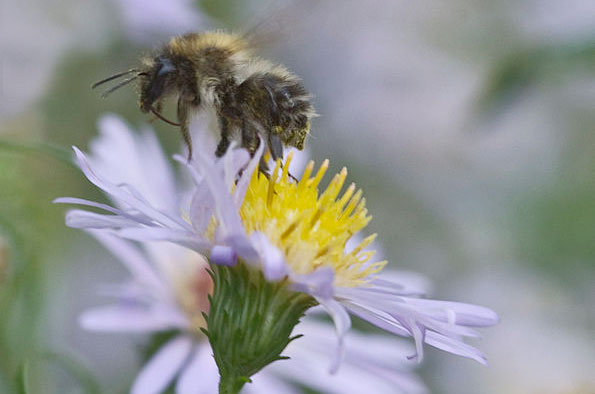 Two new pieces of research commissioned by the UK Government have found no evidence of a link between neonicotinoid insecticide use and bee health.

During a debate in the House of Commons on 26 March, agriculture minister David Heath confirmed that the results of research into the field effects of neonicotinoid seed treatments on bumble bee colonies showed no relationship between colony growth and neonicotinoid residues in pollen or nectar in the colonies.

The research, conducted by the Food and Environment Research Agency (Fera), reinforces previous advice by Government scientists and the independent Advisory Committee on Pesticides that the evidence available does not indicate harmful effects of neonicotinoid use on bees under field conditions.

A second study published by Defra on 27 March, assessing the key evidence available on neonicotinoids and bees, found that laboratory based studies demonstrating sub-lethal effects on bees from neonicotinoids did not replicate realistic conditions.

Commenting on the new research, Crop Protection Association chief executive Nick von Westenholz said: "Both these studies underline the importance of taking extreme care when extrapolating the findings of laboratory studies to the field.

"This latest research confirms that a ban on the use of neonicotinoid seed treatments would be unlikely to improve bee health, whilst removing a key crop protection technology which is vital for economically and environmentally sustainable crop production in the UK and across Europe.

"I hope it will encourage those who have been calling for a ban on products such as these to take a step back and consider what measures are really needed to protect bee health, rather than simplistically blaming the nearest chemical."

NFU lead on bee health Dr Chris Hartfield said: "We need to be careful not to get drawn into a game of ‘research study top-trumps’. Defra’s latest research is one more study, with limitations and flaws like all other studies. However what it does show clearly is that we do not have an adequate understanding of the levels of exposure to neonicotinoids experienced by bees under field conditions. And without that fundamental understanding it is clear that we cannot quantify whether and how harmful the impacts are to bees under field conditions.

"The European Commission has decided to manage the risks identified by EFSA around neonicotinoids and bees by banning the use of these insecticides. The Defra study shows that this precautionary approach by the Commission is neither proportionate nor justified by the current evidence we have available.

"Everyone who works to improve bee health would like a silver bullet and a single target to aim it at. But the reality is that bees continue to face multiple challenges of pests and disease, the fragmentation, degradation and loss of habitats, changing climate, invasive species and chemicals they encounter in their environment. We do not have the evidence to point the finger of blame for widespread declines in pollinator populations at any single factor."

The UK, which abstained from the vote for suspension, will be guided by the views of the Advisory Committee on Pesticides (ACP), based on work just published by the Food and Environment Research Agency (FERA). Given that the ACP is generally known for judgements based on sound science, this gives some cause for optimism – that the UK will adopt a more positive stance.

"The other dataset which needs to be put into the equation is the impact of any such restriction," says Dr Colin Ruscoe, chairman, BCPC.

"Given the multiplicity of influences on bee health reported globally in recent years, suspension of use in itself would not provide scientific evidence on the effect of neonicotinoids. The fact that France has significantly restricted the use of these insecticidal seed treatments, with no concomitant improvement is not lost on beekeepers.

"Whereas loss of access to these products would clearly have extremely serious effects on agricultural productivity, given the absence of alternatives for control of many key pests of broad-acre crops, as well as fruit and vegetables, as demonstrated by an industry-led report on the subject."

"BCPC now calls for an EU Commission-sponsored, independent impact assessment of the ban, as well as further properly-designed field experimentation, upon which to base its decisions," says Dr Ruscoe.

"The UK has already called for both. Hitherto, the crop protection industry has led such assessments, which however well-conducted, will not have the credibility required. The EU Commission should abide by established practice and accede to this request, rather than ignoring established rules for political expediency."