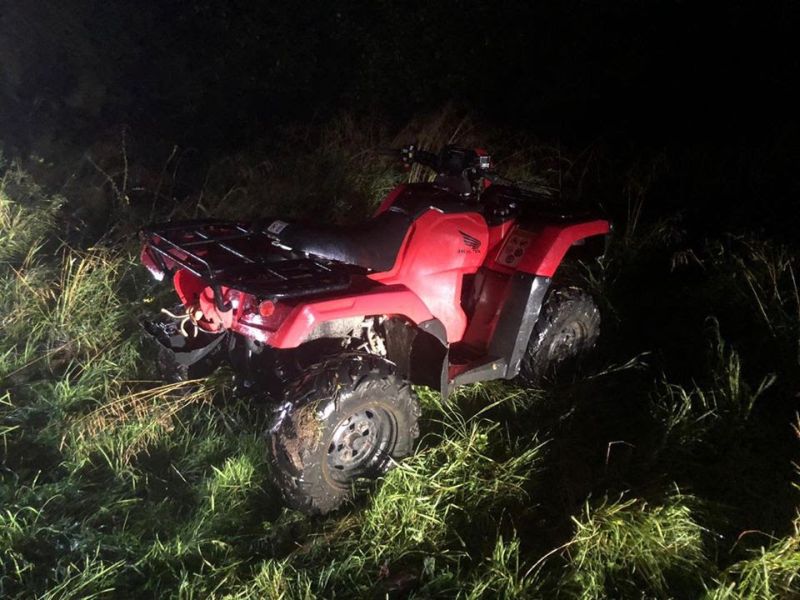 Farmers have been reminded on the need to increase vehicle security after police recovered a stolen quad bike found abandoned in the fog.

North Yorkshire Police have issued tips to farmers on the need to secure farm vehicles following a recent theft.

The force said quads are frequently targeted by thieves in rural areas as they are small, expensive and easy to transport.

In the event of a theft taking place, their loss can have a significant economic impact on farms and other rural businesses.

Just before 1am on Thursday 20 August, a member of the public reported a quad bike being driven in suspicious circumstances through Helmsley market place.

Police officers headed to the area, cutting off nearby roads to stop the quad getting away.

Despite the darkness and fog, officers managed to find the quad at 1.40am. It had been abandoned down a track off the A170, west of Helmsley.

Although no suspects were immediately located, the quad – a red Honda TRX – was recovered and enquiries begun to locate its rightful owner.

The following morning, police received a call from a farmer. The quad had been stolen from a locked building at a farm in Helmsley.

A tractor had been parked up against the building, but thieves had forced it back and managed to get inside.

Officers were able to share the good news that the stolen quad had already been found.

A crime scene investigator has carried out forensic enquiries at the scene of the burglary, and enquiries are ongoing to identify those responsible for the theft.

How can I secure farm vehicles?

Police praised the owner for following good crime prevention advice by parking the quad in a locked building with a large farm vehicle blocking access.

Officers are reminding other farmers and landowners to secure their quad bikes by taking these precautions:

• Mark or customise your quad so it is easily identifiable, and keep a record, including photographs and serial numbers.

Anyone with information about the theft of the Helmsley quad have been told to contact North Yorkshire Police on 101, quoting reference number 12200144631.