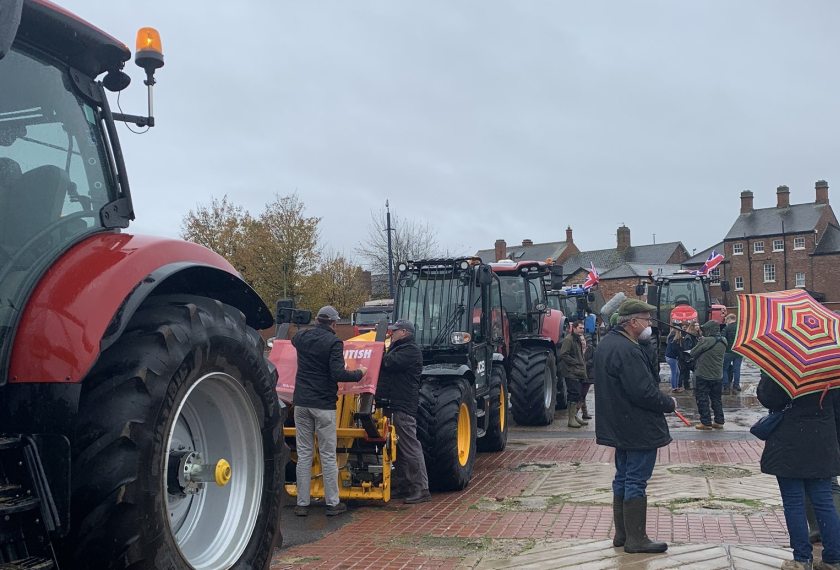 Tractor-driving farmers demonstrated in Melton Mowbray on Thursday to raise concerns over the future of British food and farming standards.

Around 30 farmers took to the streets of the Leicestershire town, calling for UK standards to be protected once the EU transition period ends.

Organised by Save British Farming (SBF), the demo began at Melton Mowbray Cattle Market and then set off on a circular route around the town.

The campaign group has held several tractors protests across the country in recent months.

Liz Webster, founder of SBF said: “This government was elected on a manifesto which promised to uphold food, animal welfare and environmental standards.

"But now they are bamboozling us with a myriad of excuses for selling British farmers down the river. In truth, it’s because they are desperate to do a deal with the USA.

“Sadly, the trade off means we have to doff our caps to America First demands and allow them to dominate and decimate our British agriculture and culture.”

Farmers are concerned that the UK may be forced to accept lower standards to secure future trade deals with countries such as the US.

The government voted earlier this month to reject a Lords' Agriculture Bill amendment which sought to uphold standards.

Are you up for doing a tractor demo in your town?
Make sure you’re following @BritishSave and sign up for updates ?? https://t.co/EAo2DTRnk5#farminguk pic.twitter.com/YUn03UyCCM

Both amendments will now return back to MPs in the House of Commons once again on 4 November, in a parliamentary process known as 'ping pong'.