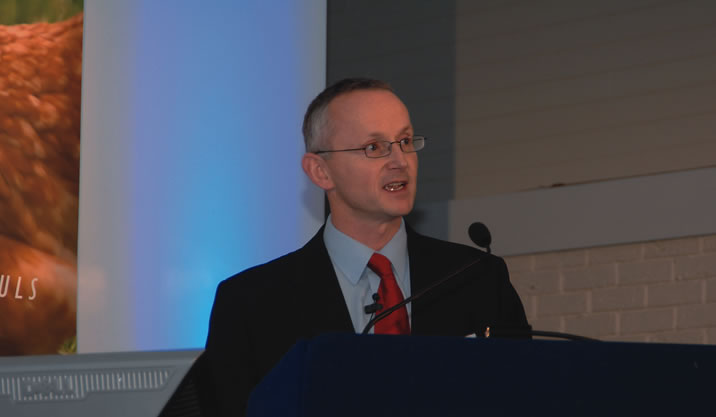 Mark Williams, chief executive of the British Egg Industry Council (BEIC), says it is "morally wrong" that battery eggs outlawed under European Union rules are now being allowed into the EU as a result of a trade agreement with Ukraine.

A bilateral trade deal between the European Union and the East European country - a huge producer of eggs - does not include provisions covering animal welfare - a fact that will allow Ukrainian battery units that are illegal under EU rules to ship their eggs to EU member states. Mark Williams said that the European Commission could have negotiated clauses on animal welfare as part of the agreement, but it had not done so, and he said the result would be very frustrating for producers in Britain and other EU countries who had invested large amounts of money to comply with the European Union's ban on the use of conventional battery cages.

Ukraine's egg industry has grown substantially in recent years. According to figures compiled by the International Egg Commission (IEC), the country's national layer flock more than doubled in the decade between 2000 and 2010 - from 40.9 million to 109.3 million, as the centre of European egg production moved east. In those 10 years Ukraine moved from seventh in the European top 10 of production to second.

Mark Williams said that the Ukrainian imports would be subject to a quota because eggs had been granted sensitive product status and, initially, the imports would only apply to Class B eggs and egg products. But British Lion processors only recently warned about the threat of imports after the latest figures issued by the Department for Environment, Food and Rural Affairs (Defra) showed that egg product imports increased in the first half of this year - to 1.3 million cases (the equivalent of 468 million eggs) in January to May from 1.2 million cases in the same period last year. Just in May this year imports of egg products were up by 20 per cent year on year from 255,000 cases to 307,000 cases. British Lion egg processors has issued a warning to food manufacturers, retailers and caterers about the risks involved in using imported eggs and egg products.

Two EU states - Italy and Greece - are already being taken to the European Court for failing to comply with the battery cage ban, and the prospect of battery eggs being imported from Ukraine will only add to concerns about the quality of imports into the UK. “With producers in Italy and Greece continuing to flout the EU Welfare of Laying Hens legislation and high profile issues with imported eggs and egg products, such as salmonella, dioxin contamination and allegations of free range fraud, occurring in recent years, it is imperative that food manufacturers, retailers and caterers understand the potential risks that may be involved when using eggs and egg products that do not have the guaranteed food safety and welfare standards of the British Lion mark," said Ian Jones, chairman of British Lion egg processors.

Mark Williams said that Class A shell eggs from Ukraine would not be allowed into the EU until 2014 at the earliest, and even then the country would have to submit its salmonella policy for approval. "But the Commission could have written animal welfare requirements into the agreement, and it didn't." Mark said that the European Union was currently negotiating a trade agreement with the United States and it was vitally important that the outcome of those talks had the right result for the egg industry.

Mark said that producers in some countries outside the European Union were aware that they would find some UK businesses reluctant to buy eggs that were not produced to EU welfare standards. He said that during a trip to Argentina he found that egg producers looking to export to the EU from that country realised that the best approach would be to use EU welfare standards. But British Lion processors are continuing to press home the message to UK manufacturers, retailers and caterers that they should buy British eggs to ensure that what they are buying is safe and legal.

“The risks involved with using imported eggs and egg products are numerous and very real and should not be taken lightly," said Ian Jones.

“In addition to the safety issues that have been well documented, confusion around the translation of certain terminology when importing eggs and egg products, particularly between free range and barn egg, can make the sourcing process problematic.

“It is also quite astonishing that producers in Italy and Greece are still producing eggs and egg products from hens housed in conventional cages. While eggs continue to be produced in this way, despite assurances that they will not be traded outside the country of production, an element of risk remains for those purchasing imported eggs and egg products.

“However, these risks are easily avoidable. Using British Lion eggs and egg products within food products and the Lion logo on packaging is an easy way to reassure consumers, guarantee responsible sourcing and highlight the quality of food products.”

He said British Lion eggs and egg products were produced to a stringent code of practice, helping to minimise the risk to operators and ensure that they were using top quality, British egg products.

All eggs produced commercially in this country are covered by the National Control Programme on salmonella to ensure the highest standards of food safety.

On the latest figures for egg product imports, Ian Jones said, “Market disruption, caused by the conventional cage ban, drove some operators to look abroad for egg products in 2012 but availability of top quality British Lion egg products has now been restored, so this is an alarming trend. It is even more surprising when, after the horse meat scandal, consumer interest in British and responsibly sourced ingredients is at an all-time high."