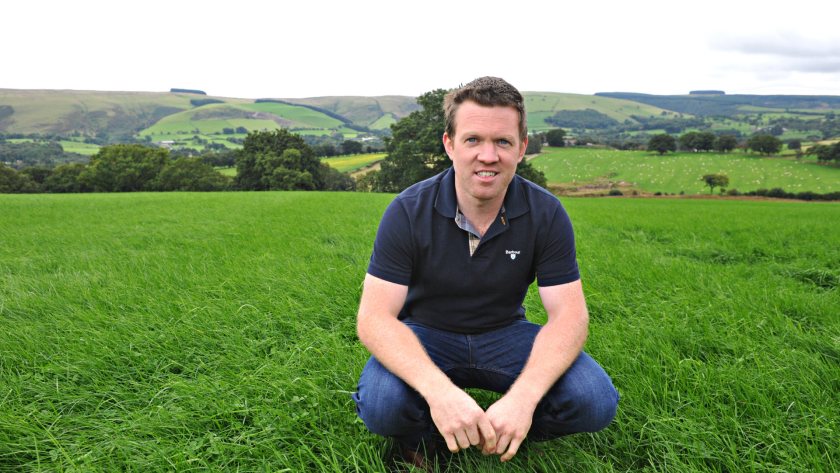 Neil Davies is concentrating on growing more and better-quality grass at his farm in Llangammarch Wells, Powys

A recent on-farm experiment has shown that decisions to re-sow either by ploughing or direct drilling are not always straightforward.

He has overhauled his livestock system, switching from suckler beef production to rearing and finishing bought-in dairy beef cattle.

He is also concentrating on growing more and better-quality grass at Cefnllan, Llangammarch Wells, by trialling different reseeding techniques and using rotational grazing methods instead of set stocking.

During a recent Farming Connect open day, farmers saw the results to date and heard expert advice from three of the specialists who have been advising on the trials – grassland specialist Charlie Morgan, nutritionist Hefin Richards and grazing consultant Sarah Morgan.

As a trial, to compare different reseeding methods, one field had been part-ploughed and the remainder directly drilled with different machines, with some areas sprayed off with glyphosate and others not.

The results of this particular trial showed that the ploughed section considerably out-performed the others, growing 80% ryegrass together with timothy and clover.

“We use 70% as a baseline as an acceptable ryegrass percentage, therefore 80% is a very good result," said Mr Morgan.

No new clover seedlings or timothy were found in the direct drilled unsprayed treatments, but there was original clover present on all treatments other than the ploughed section.

The increase in weed species on the sprayed areas was quite significant, creating competition for the productive grasses for light, space and nutrients.

Mr Morgan said reseeding through ploughing is around £150/ha more expensive than direct drilling but that this cost is quickly recouped through enhanced feed value in the reseed.

Although ploughing releases carbon from the soil, he suggested that there were environmental challenges that needed to be taken into account from direct drilling.

“If argued that the sward is less productive than a new ley and new seeds have better disease and drought resistance, then why keep the old sward that is hampering new seed," he said. 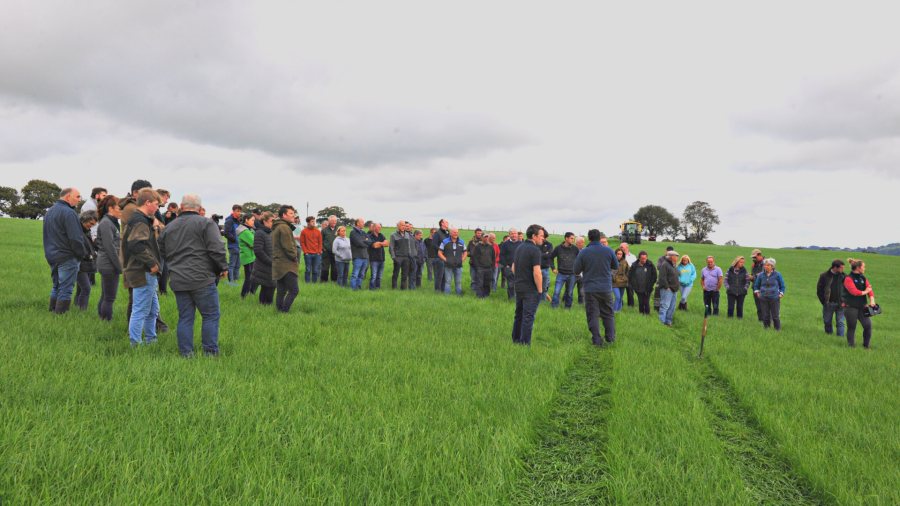 During a recent farm open day, farmers saw the results to date and heard advice from three specialists

“Surely spraying or ploughing has to be the approach ahead of just drilling into an existing sward."

Sub-optimal grassland would also mean that a farm would need to buy in concentrates, and diesel and inputs would be consumed if under-performing leys had to be treated more often, Mr Morgan added.

“The answer is to not plough too often and to put in the right seed mixes, the ones that are going to last," he said.

Conducting a Nutrient Management Plan can determine the soil health and fertility and calculate the fertiliser requirement, resulting in improved nutrient management.

As well as growing better quality grass, it is vital to utilise it as this aids quality, Mr Morgan said.

At Cefnllan, this is being achieved through rotational grazing with guidance from Sarah Morgan, of Precision Grazing.

The farm is on track to be growing 9tDM/hectare (ha) in 2021 compared to 6tDM/ha in 2019 – an increase of 3tDM/ha, allowing savings on fertiliser and concentrate and an increase in the stocking rate.

Optimal soil fertility can reduce fertiliser requirements, resulting in both a financial and environmental benefit.

The autumn rotation is currently being managed to ensure there is sufficient grass for spring turnout.

Ms Morgan advised building covers from September, to allow the grazing season to be extended through October and November.

The target should be to close the farm with an average farm cover of more than 2,000kgDM/ha in November/December to ensure grass is available for early turnout in spring. Each field should have at least 100 days of rest between October and April.

Although it had been a challenging year for managing grass quality, due to weather conditions promoting a spike in early summer grass growth, cattle at Cefnllan have performed exceptionally well off grass, averaging a daily liveweight gain of 1kg.

Some had grown so well that they were finished several weeks earlier than anticipated.

There is an emphasis on growing high quality silage, through adopting a multi-cut system, and this has paid off. Silage ME (metabolisable energy) is now averaging 11.5MJ/kg.

Hefin Richards advised that forage quality is key to the economics of dairy-beef production, to grow animals on a high forage diet followed by a higher starch finisher diet for quick finishing.

The silage is regularly analysed and the blend is formulated to balance the analysis. Minerals and live yeast are included in the ration to help rumen function and forage utilisation.

Sourcing cattle with high genetic merit also contributes to high performance; this, together with a focus on health, had resulted in consistent groups at Cefnllan and this had aided feed management, he added.

“There have been consistent batches coming through so it has been easy to target feed," said Mr Richards.