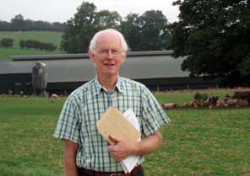 Former NFU president Sir Simon Gourlay, a passionate moderniser whose reforms changed the way the organisation operated, has died at the age of 85.

He was began as a beef farmer before turning his hand to dairying and later free-range egg production.

He was behind a major re-structuring of the organisation – replacing the old NFU county system with a new, streamlined regional set up.

He was also instrumental in creating the NFU’s popular countryside membership category.

“During his term in office, Sir Simon had to deal with a number of serious issues and dealt with all of these calmly and effectively.

“But he’ll be remembered most as being a great reformist and moderniser. He came into office determined to leave the NFU in a better condition than he found it – a lasting legacy of his five-year presidency.”

She added: “Farmers and growers of England and Wales owe Sir Simon Gourlay a huge debt of gratitude for the unwavering commitment that he showed as one of their most effective leaders.”