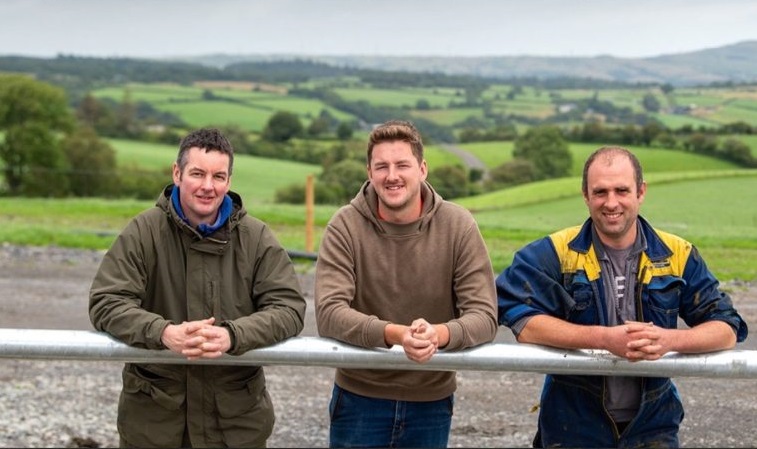 The young farmers were determined to expand their original family businesses, whilst also enabling their respective parents to take a step back

Two farming families from the Conwy Valley in Wales have gone into a partnership to run as a single state-of-the art dairy business.

The families decided to join together for a better work-life balance, more stock, less pressure and the prospect of new opportunities.

Young farmer Emyr Owen, 30, from Bodrach, near Pandy Tudur, farms in partnership with his parents on a 185-acre former beef and sheep farm.

He joined up with his next door neighbour Gwydion Jones, 38, whose family formerly farmed a herd of 150 dairy cattle at the neighbouring 95-acre Ty’n Ffynnon farm.

They combined forces in a new joint venture business partnership thanks to the Welsh government's Farming Connect Venture programme.

Emyr and Gwydion are Aberystwyth University agriculture graduates. They were determined to expand their original family businesses in order to maximise the potential to produce milk off grass whilst also enabling their respective parents to take a step back.

Emyr has a contract agreement to manage a local farm and realised he could not farm both places without continued support from his parents who hoped to take a step back.

Gwydion has been able to bring in additional members of staff, freeing up more of his time and improving his work life balance. He says the support from the Venture programme was invaluable.

“The combination of having a sound business plan and legal agreement together with Emyr and I having a clear vision of what we want to achieve, mutual respect for each other and the determination to safeguard the future of our family farms, has given us a great basis for moving forward.”

“Although the two farms were being run very efficiently, both families recognised we had taken them as far as we could and agreed it was essential to plan ahead for the longer-term sustainability of both,” says Emyr.

At the end of 2018, they contacted their local Venture officer, Gwydion Owen, who helped support the families throughout the joint venture process.

They received funded business and legal support through Venture, and the two businesses were able to set up a new limited company, a trading arm, Llaeth Bod-Ffynnon Cyf.

Armed with a business plan provided by approved Farming Connect consultant, Geraint Jones of Kite Consulting, the two families formally joined forces, were able to approach the bank and receive the loan needed to create their new dairy infrastructure and increase stock numbers.

This was quickly followed by a legal agreement drawn up by Elin Owen of Agri Advisor Legal LLP.

Emyr’s family sold all their beef and sheep in order to purchase dairy heifers and focus entirely on the new dairy enterprise.

For Gwydion and his family, this was an opportunity to increase the size of their original spring calving New Zealand herd from 150 through the purchase of 300 bought-in dairy heifers which are now owned equally by both families.

A new rotary milking parlour and suitable tracks were built at the yard at Bodrach which was centrally located between the two farms with a new water supply installed on both farms.

The new milking infrastructure has the capacity to milk 450 cows twice daily, producing up to 5,000L of milk annually, sold on contract to Arla.

Gwydion has been able to bring in additional members of staff, freeing up more of his time and improving his work life balance.

“A clear vision of what we want to achieve, mutual respect for each other and the determination to safeguard the future of our family farms, has given us a great basis for moving forward,” he said.

Gwydion added that the support from the Farming Connect's Venture programme was invaluable.