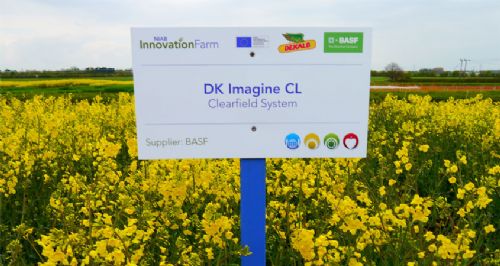 Oilseed rape growers and advisors had the opportunity to explore recent breeding developments in oilseed rape and see how they can improve on-farm production and market dynamics at this season’s first NIAB Innovation Farm workshop ’Producing Quality Oilseeds.’

Clare Tucker, of BASF reviewed recent trends in UK oilseed crop productivity, focusing on the need for good establishment and optimising the flower canopy, alongside reducing losses through efficient weed and disease control.

Referring to DEFRA statistics, Tucker presented data showing that the rape area in the UK had risen to 700Kha and there had been an increase in yield to 4t/ha, with a particularly significant jump having occurred in 2011.

’This yield increase is believed to be in part due to improvements in the efficiency of the flowering canopy.’Joint research between BASF and ADAS has led to new knowledge of canopy architecture and strategies for the application of fungicides with growth regulatory activity such as metconazole,’ she says.

’We have seen that higher yields can be achieved from a more open canopy in which the lower and secondary branches are not shaded by the main raceme - and a key factor is understanding the developmental stage at which to apply the metconazole to get these effects.’

’An added bonus for this shorter more open architecture is that plants are less prone to lodging and there is also an increase in rooting depth, a trait that is beneficial in dry conditions which occurs every two - three years.’

Dr Rachel Wells, from the John Innes Centre, gave an overview of the work that she is carrying out to understand the genetic processes that produce final oil content.

’This would allow for the introduction of genetic variation in oilseed rape which could then be used by breeders. This process can then be used to manipulate the rapeseed fatty acid profile to that required for the bio lubricant industry; high in oleic acid and low in saturated fats. Considering it is estimated that 90% of all lubricants could be replaced by bio lubricants - this is a significant development,’ says Dr Wells.

Describing Monsanto’s recent breeding work with Vistive oilseed rape, Andrew Smooker, Technical Oilseed Specialist, focussed on the development of ’Vistive’ oil: ’a healthier oil as there is no need for hydrogenation due to its reduced levels of linoleic acid which is receiving good industry support. ’

Vistive is available on contract for a premium with Monsanto, Mr Smooker pointed out that to achieve the quality needed, high standards of agronomy would be required - particularly in relation to volunteer weed control, but was confident that this is achievable as more and more growers take on the variety which is currently grown in’28 locations across six European countries.

The Clearfield system is an important step in giving farmers better control of oil quality through weed and volunteer management, providing control of some of the most difficult broad-leaved weeds such as charlock, hedge mustard, wild radish and shepherds purse.

Based on using a specific herbicide, Cleranda (metazachlor and imazamox), on Cleranda-tolerant oilseed rape hybrids, this system will be clearly differentiated with the Clearfield brand carrying the suffix CL.

Compared’to other metazachlor-based herbicides, the efficacy of’ Cleranda is less dependent on seedbed conditions, whilst the timing application window is less restrictive because Cleranda is applied later at post-emergence.

Mrs Tucker was clear to point out that Cleranda will be marketed by BASF with limited quantities available through all BASF distributors. BASF are asking that as only limited quantities of Cleranda are available, growers check access to Cleranda before committing to grow a Clearfield hybrid.

Finishing on a session on current global trading conditions and future implications, Philip Kimber of Frontier pointed out that global rapeseed production has remained relatively flat over the last 3 years.’

’We are currently running around a 2 million tonne deficit into the EU rapeseed crush’ he says.’ Factor into that events such as drought conditions in Australia and recent winter kill in mainland Europe, there are good prices for UK oilseed rape grain today.’ For the short term, Mr Kimber went on to point out that this tight EU rapeseed situation, US weather and China building stocks could all buoy the market, though macro-economic factors such as slower growth in EU and China than expected could off-set somewhat.’ He concluded that overall, the outlook for UK produced oilseed rape grain remains very positive.