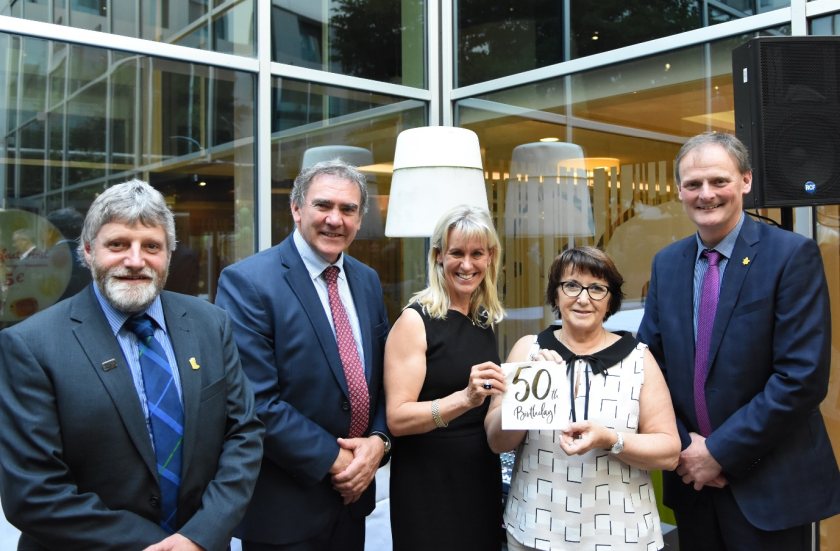 The NFU, NFU Cymru, NFU Scotland and Ulster Farmers' Union (UFU) have hailed the work of the BAB office and its continued support for UK farmers.

The unions first established an office in Brussels in 1972 to represent the interests of farmers and growers as the UK joined the then European Economic Community (EEC).

Officially known as the British Agriculture Bureau, 50 years later this permanent base in Brussels continues to represent the 70,000 members of the four unions.

Over the years the office has helped farmers to adapt to huge changes; from the introduction of direct payments to the end of quotas, embracing new technology as it came along, adjusting to the introduction of the WTO, and striving to meet new climate targets.

To this day, the BAB office continues to advocate on behalf of its farming members to the European institutions, other European partners and Brussels stakeholders.

Today, guests joined the four unions to celebrate this work, including MEPs, members of the EU Agriculture Commissioner’s cabinet, the UK ambassadors to the EU and Belgium, and members of the European farming group Copa-Cogeca.

In a joint statement, the four union presidents said that the Russian invasion of Ukraine had shone a light on the fragility of food systems.

“There are many countries now confronting the reality of how farmers can continue to feed the world when supply chains are pushed to their limits, input costs are soaring, and climate change is wreaking havoc on harvests.

“Even though the UK has left the EU, it has never been more important for farmers across Europe to work together to tackle the challenges we face on a global scale."

The war had also demonstrated the importance of international unity, the presidents said. "Ultimately, if we are to feed 10 billion people by 2050, global food security must be a priority and this means working together across borders to find solutions.

“The approaches taken by our policy makers may differ, but the ambitions and needs of UK and EU farmers remain aligned – to run efficient, profitable business that produce world-leading, climate-friendly, affordable food for people at home and abroad."

They added: “We will continue to support members by working with our European colleagues and ensuring that the voice of British farming is heard internationally.”