UK meat consumption must be reduced by 30%, food strategy says 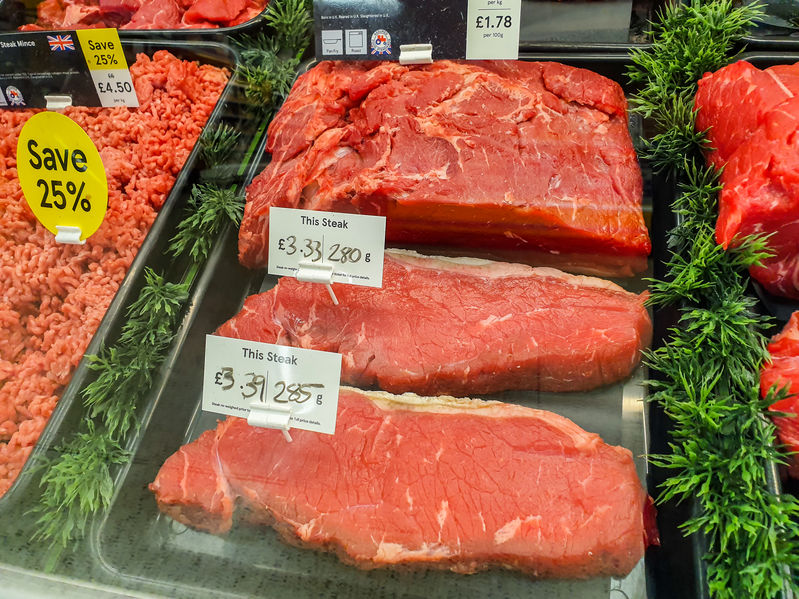 The government is being urged to set a target to help reduce the nation's meat consumption by 30% within 10 years, the new National Food Strategy says.

The second part of the landmark report warns that eating habits in the UK are 'destroying the environment, which in turn threatens food security'.

The 288-page report, released on Thursday (15 July) by businessman Henry Dimbleby, says alternative proteins must be developed on a larger scale.

The restaurateur, who was invited by Defra to lead the National Food Strategy, says that the British public's current appetite for meat is 'unsustainable'.

He notes in the report that 85% of farmland is used to feed livestock, adding 'we need some of that land back'.

"Some farmers are introducing livestock back into traditional rotations, to improve the soil and reduce the need for fertilisers," he said in the report.

"Careful livestock farming can be a boon to the environment, but our current appetite for meat is unsustainable."

The government’s own Climate Change Committee concluded that the UK must reduce meat consumption by 20–50% in order to reach net zero by 2050.

One idea that has been proposed by MPs and campaign groups is the imposition of a 'meat tax', but the report says this is 'politically impossible'.

Such a measure has the consequence of penalising poorer households, it says, as the price hike on cheap cuts or mince would be much bigger than on steak, for example.

Instead, the report urges the government to 'nudge consumers' into changing their meat eating habits, while investing in methane-reduction projects and the development of alternative proteins.

Mr Dimbleby said: "In much the same way that multiple state interventions have made renewable energy cheaper than fossil fuels, this would create a shift in behaviour without the need for an unpopular and regressive tax."

The strategy calls on farmers to be at the centre of this transition in the UK's food system, as they are the 'custodians of the land'.

It highlights the need to properly reward farmers for environmental improvements above and beyond what they already do.

Recommendations include helping producers transition to more sustainable farming methods by guaranteeing the budget for farm payments to at least 2029.

The report also suggests that land should be divided equally between high intensity farming, green low-intensity agriculture and nature reserves.

"They know better than anyone how depleted the soil is, and how reduced our wildlife is. Many farmers are already trialling new ways to manage their land for the benefit of nature," Mr Dimbleby said.

"We are asking farmers to change the way they work for the public good. We must ensure they are properly recompensed. And we must protect them from unfair competition."

The strategy also urges the government to ensure lower-standard food imports do not enter the UK, in turn undercutting farmers and environmental goals.

Responding to the report, the Country Land and Business Association (CLA), which represents 33,000 farmers and landowners, says the government must understand the 'important role' livestock plays in environmental management.

"It needs to avoid succumbing to the false narrative set by campaign groups that meat is inherently bad," said Mark Bridgeman, CLA president.

"It is precisely because of these standards that government and industry can argue with confidence that consumers should buy British meat as part of a healthy and environmentally conscious diet."

However, the Soil Association says the 'evidence is clear' that dietary change will be needed to enable more nature-friendly farming.

"We will need to eat much less industrially farmed meat, which can drive deforestation and land use change through its reliance on imported feed crops," said the charity's CEO, Helen Browning.

"The debate in farming shouldn’t be about whether this is so, but about how to make this transformation quickly and fairly, for both farmers and citizens."

The National Food Strategy, commissioned by the government in 2019, is the first review looking at the nation’s food system in nearly 75 years.

Aside from farming issues, it calls for the introduction of the world’s first sugar and salt reformulation tax, with some of the money being used to expand free school meals.

The strategy also wants GPs to try prescribing fruit and vegetables to patients in a bid to encourage healthy eating.

The government has promised to respond with a White Paper within six months.