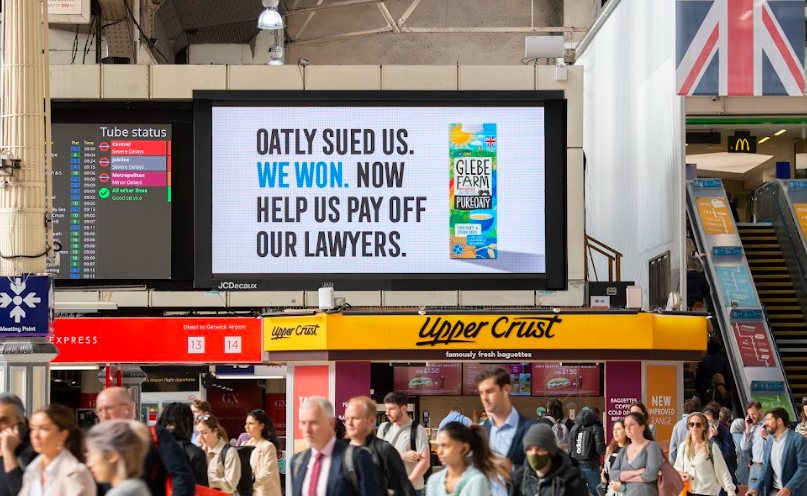 Glebe Farm's billboards, which were in place for one day only, called out the recent court case it had with Swedish oat milk giant Oatly

A British oat producer took over the billboards in London's Victoria train station with a disruptive above-the-line campaign after its court battle against Oatly.

Glebe Farm's billboards, which were in place on Monday (9 May) for one day only, called out the recent court case it had with Swedish oat milk giant Oatly.

The campaign playfully asked customers to ‘help us pay off our lawyers’, while reminding them to ‘do the right thing’ and support British oat milk.

In 2021, the Cambridgeshire family-run farm was faced with a court case from Oatly, which had made claims of brand and trademark infringement.

Oatly, which went public in the United States last year, claimed Glebe Farm's PureOaty brand was too similar to its own.

These allegations were rejected by the judge, leading to a victory for the UK oat producer.

Phillip Rayner, owner of Glebe Farm, said after that the business had the threat of the court case looming over the family for more than a year.

"We have always felt certain that we have done nothing wrong, and we were determined to fight Oatly’s claims that our brands were similar - something that is now proven to be wrong.

“You only need to look at the two products and packaging side by side to appreciate how different these brands are, and how unnecessary this legal action was."

The farm had received support from around the world, including 130,000 signatures on a change.org petition, and many comments online had described the case as a David and Goliath battle.