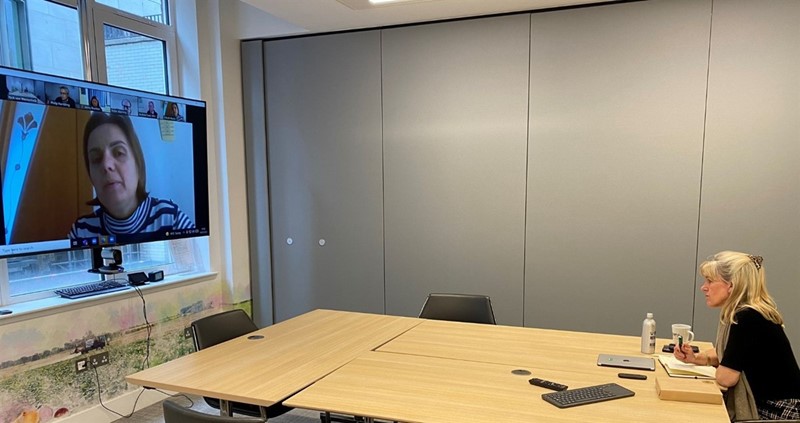 NFU President Minette Batters has spoken to her counterpart in Ukraine to discuss the impact of the war on farms and food security.

Mariia Didukh, director of the Ukrainian National Agrarian Forum (UNAF), discussed the ongoing invasion and its consequence for agriculture.

The meeting outlined the big challenges Ukrainian farmers are facing while they still look to grow food, look after livestock and secure their livelihoods.

The knock-on effects of Russia's invasion will be felt globally, as Ukraine is famously the breadbasket of the world.

Around 400 million people rely on Ukrainian crops, some living in the poorest parts of the world.

During the meeting, Ms Didukh explained that though the winter crops were good, they had witnessed lower yields than in previous years.

She added that ports were blocked and railways damaged, with fuel also scarce. She said the lack of fuel was one of the main areas where support was needed.

The discussion touched on how farmers there were tackling a shortage of farm workers, as more and more citizens joined the fight to defend their country.

She added that many Ukrainian farmers had been killing their livestock to supply the army and civilians with food.

Following the meeting, Minette Batters said there were 'massive implications' for the world and global food security as a result of the war.

She said UK farmers were keen to help Ukrainian refugees, with many already indicating they would like to give shelter and house them under the new government scheme.

"It's going to be a huge issue when I look to the countries that Russia and Ukraine provide 100% of their grain," the NFU President said.

"She explained that the best thing we can do is to try and get money to them to help them get the fuel, vet meds, herbicides and seeds they need."