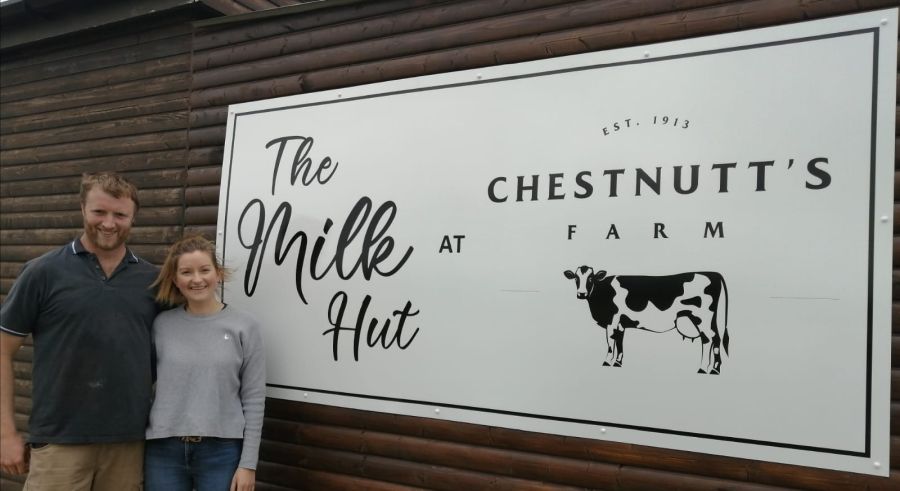 A farming couple have seen a phenomenal demand for their milk following the launch of a vending machine on their dairy farm.

William and Alison Chestnutt, who farm 100ha in County Antrim, NI, said the main selling point for them was the ability to move back to glass bottles.

The dairy producers said they wanted to be able to offer their customers an alternative to the throw away plastic cartons.

William is a fourth generation dairy farmer and Alison has a background in quality auditing and food safety within the food processing industry.

The idea came out following a trip to Holland, where the couple saw a milk vending machine in action.

“The dairy press also reports a lot on the success of adding value to milk in this way across the water in GB," William said.

"With Alison’s technical skills and my dairy cows it seemed like the perfect combination.”

The couple travelled to England to the main vending machine distributor and visited a number of farms who are already selling milk directly to the public.

A pasteurisation room was constructed, which is located close to the milking parlour and allows the milk to be directly pumped from the cow to the pasteuriser.

The machine is capable of pasteurising 150 litres of milk at a time and a fresh batch is done daily.

The milk then must be chilled to below 10°C, achieved through a separate cooling system.

The milk is transported on a trolley across the yard to the ‘Milk Hut’ which houses the two vending machines.

William said: “Pasteurising the milk ensures that it is safe for the public to drink but unlike shop bought milk, the milk we are selling is non homogenised giving it an extra creamy taste and perfect for making those frothy coffees.

"It also allows for the potential expansion into supplying local coffee shops.”

With a delay on the project due to Covid-19 ‘The Milk Hut’ was finally launched on 11 July.

There has been a huge demand which resulted in a sell-out situation on numerous days, and an average of 120 litres sold daily.

With the lifting of lockdown restrictions there has been an influx of tourists and approximately 60% of the customers to ‘The Milk Hut’ have been non locals.

It is hoped however that the local support will continue after the summer and the usual weekend spike in visitors will still provide an income during the winter months.

William said: “Chatting to many of our customers since opening it is evident that people want to know where their food is coming from and being able to buy it directly from the farm is a bonus.

"There has been an enormous response to the glass bottles as people are wanting to move away from plastic waste.”

He added: “We decided to add 250ml size bottles, along with the option of adding a flavour to the milk, to give children their own ‘mini milk bottle’ to enjoy and promote milk within the younger generation as a good source of calcium and minerals.”

The Chestnutt family own 100 ha and rent a further 46 ha. The herd of 250 cows is predominately Holstein but the change is being made to Pro-Cross breeding.

During the last two breeding seasons all cows and heifers have been bred to Viking Red, and Montbeliarde with a view to creating a uniform 3-way crossbred cow.