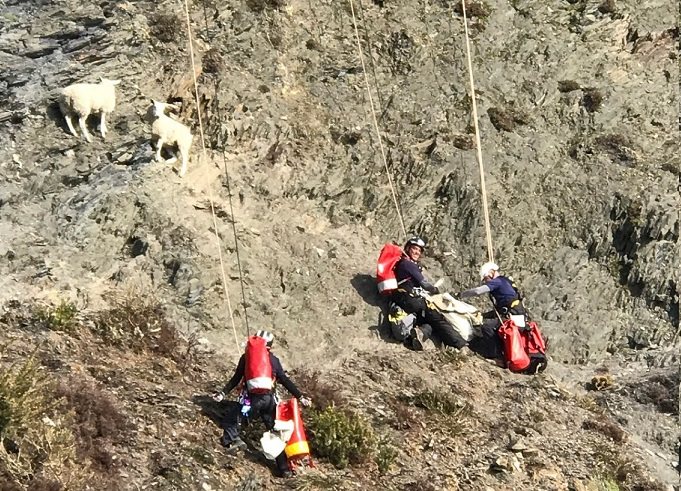 Rescuers abseiled down the cliff to access the sheep, before lowering them safely to a boat team below

A 12-strong team of rescuers have saved three sheep trapped precariously on a steep cliff edge at Dinas Island in West Wales.

The sheep became trapped on the cliff above the sea with very limited grazing available and were in "serious jeopardy".

Remarkable drone footage shows the extent of the sheep's plight - and the size of the drop to the sea below.

Rescuers from the RSPCA abseiled down to reach the sheep, and carefully put the animals into secure bags.

They were then lowered to another team of officers in a boat below.

Fortunately, all three sheep were saved successfully and immediately returned to the farmer.

RSPCA inspector Neill Manley, who coordinated the rescue on 2 March, said: "An operation like this takes a lot of planning, but fortunately everything went according to plan.

"The weather was relatively calm, and our system worked well - with officers accessing the sheep by abseiling down the cliff, before lowering the sheep in bags to a boat below.

"We're delighted to have been able to help these sheep in their hour of need."