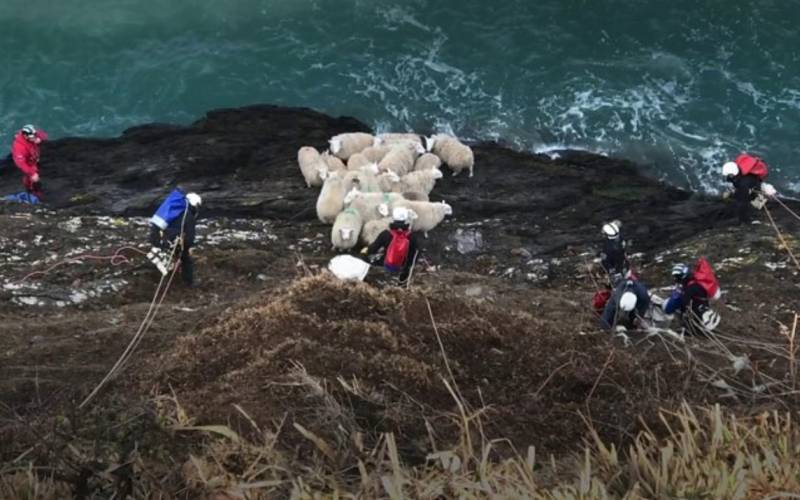 Rescuers have completed the 'most technical rescue' they have ever faced after saving 65 sheep from sea cliffs in Pembrokeshire.

A rescue operation to safely remove a further 23 sheep trapped on sea cliffs in Pembrokeshire has been completed following a suspected livestock worrying incident.

The operation began on Monday 1 April and has been described as the “most technical rescue”, involving 65 sheep which have been successfully rescued.

The sheep were on cliffs around 70-80 metres high and had spread over a wide area in groups. It was thought that the large flock had been scared over the cliffs by a dog.

These remaining sheep had luckily found their way to an area with some forage and had with recent rain had some moisture too.

The operation saw 23 sheep rescued with 22 of them being taken via the rescue boat to shore and one was hauled up to safety by a rope rescue team.

Last Monday (1 April) around 40 sheep were initially rescued using the boats, where the sheep were rescued from the bottom of the cliffs and on Tuesday three further sheep were safely rescued by the rope rescue team.

Another sheep was then rescued on Friday, who had become stranded from the rest of the flock, and was stuck under a slab in a tiny sheltered cave away from any food.

RSPCA animal welfare officer Andrew Harris, who led this operation, said he was delighted for the rescue operation to come to an end

“This has been a long and difficult rescue and the most technical rescue we have had to deal with,” he said.

“All the rescuers have worked really hard and it is great to see that these sheep are no longer in any danger and are back safely with the farmer. Luckily the sheep rescued have been mostly been uninjured and have just needed some food and water following their ordeal.”

The incident led the farming industry to urge people and dog walkers to take care around farm animals and ensure that their dog is kept on the lead at all times when in or near fields containing livestock.