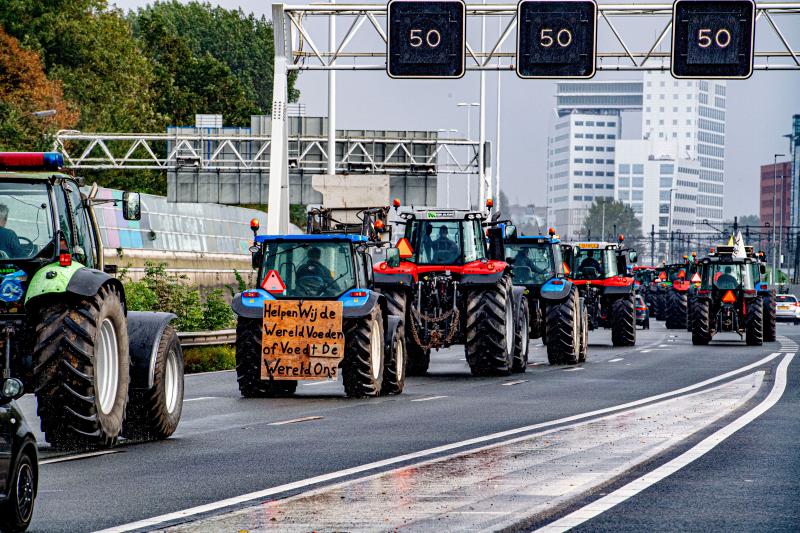 Thousands of farmers took to the road during a national day of protest in the Netherlands yesterday (Photo: Robin Utrecht/Shutterstock)

Farmers in the Netherlands have protested in their thousands to counter the 'negative image' attached to the industry.

Around 2,000 tractor-driving farmers took to the streets and roads in an attempt to gain greater recognition for their work on Tuesday (1 October).

The slow procession of agricultural machinery made their way to the country's capital, The Hague.

It caused traffic jams of up to 700 miles at the morning rush hour, according to motoring organisation ANWB.

The protest follows increasing anger in the Dutch farming industry as the media, government and green groups continue to blame environmental issues on farmers.

In particular, the industry is often highlighted for the amount of nitrogen it emits.

Just had this sent to me by a Dutch friend. Farmers are being blamed for climate change and pesticide use in Holland. So what do they do protest. I bet @BBCBreaking does not features this story. The world may rea#lise they need food producers one day. pic.twitter.com/oS3n0JGwh5

It follows the release of a report which calls for inefficient livestock farms to close down and some speed limits reduced in efforts to slash pollution.

But organisers writing on one of the protests' website said: “We are not animal abusers and environment polluters. We have a heart for our businesses.”

Farm groups say they fear that the constant belittling of their industry is helping create a 'negative image' of the country's food producers.

Dirk Bruins, of the industry group LTO, said: “Farmers and growers are sick of being painted as a 'problem' that needs a 'solution'.”

Meanwhile, one sheep farmer told a crowd of protesters in The Hague: “This is about our families, our future, the future of our children. It's about our way of life.”

“I am here to listen to you. You work very hard. I know what it’s like to work on a farm.

“I agree that there needs to be more appreciation from society, government and politics,” she said.

“As long as I am a minister, there will be no halving of the herd.”

Police made two arrests yesterday. A tractor driver was arrested after he drove over a fence and another was apprehended after he tried to stop authorities arresting the first.

“The police respect that farmers are standing up for their interest and we're trying to facilitate this demonstration with hundreds of tractors as well as possible,” authorities said in a statement.

In the UK, numerous farm groups have called out similar attacks made against their industry by the media and environmental groups.

The National Sheep Association believes farmers are 'wrongly blamed' for climate change amid an increase of 'unbalanced and inadequate' reporting.