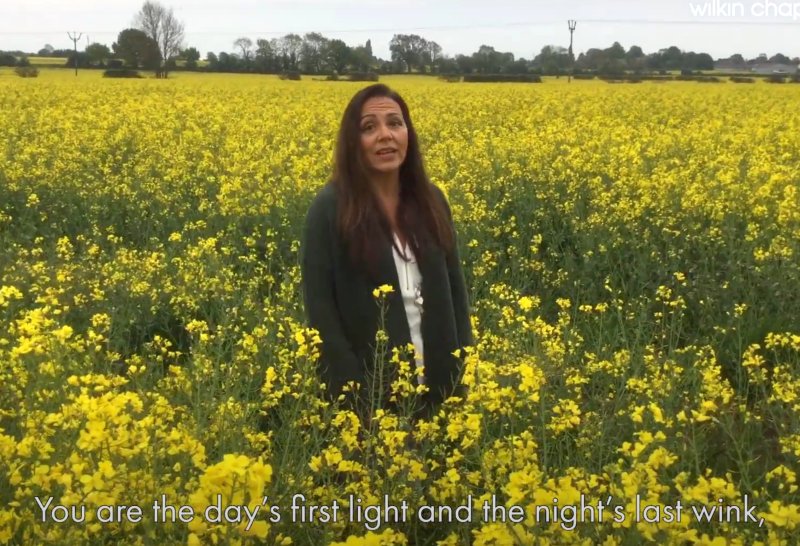 The poem opens with the line 'we live and work under wide Lincolnshire skies where Lancasters were counted out, counted in'

A new video poem has highlighted the vital role of Lincolnshire’s farmers, whilst raising awareness of a charity that offers support to the county’s rural community.

The release comes on National Mental Health Awareness Week, with industry leaders concerned how higher than average suicide rates within the farming community may be exacerbated by current issues.

It is also released a day after the Pick for Britain campaign was launched by Prince Charles to encourage furloughed workers to help pick fruit to feed the nation.

The new video - called ‘The Voice of Our County’ - opens with the line "we live and work under wide Lincolnshire skies where Lancasters were counted out, counted in."

"Here’s to you’, they say of the farmers: ‘you are the day’s first light and the night’s last wink…and every hour in-between," the poem says.

"The veg box of the nation, whose heart pumps just above sea level, her arteries and veins carved by generations", the poets say of the county, as they mention some of Lincolnshire’s rural towns.

The poem was penned by Grimsby poet Carolyn Doyley, who was commissioned by Wilkin Chapman’s head of agriculture, Catherine Harris.

Catherine, who is from a farming background, read it out to great applause at the 2019 Lincolnshire Agricultural Society dinner.

Held at the Epic Centre, the dinner raises money for various charities, including the Lincolnshire Rural Support Network (LRSN).

Wanting to make more use of the poem to champion the work of the LRSN, Catherine rallied Wilkin Chapman when Covid-19 struck, and the lockdown forced home working.

As amateurs when it comes to both reciting poetry and filming, a whole host of new ‘video stars’ shot their own footage – with some selected to read lines that reflect their professional specialisms.

“The idea was to have some fun, to engage and unite colleagues who are spread across the Lincolnshire and Humber region," Catherine said.

"But, most importantly, to remind people of the importance of the county in ‘feeding a nation’ and how the Lincolnshire Rural Support Network is helping rural residents, especially at this time."

For the team at LRSN, it is hoped the video can raise its profile – and funds – during this vital time.

The charity has seen a 10 percent rise in calls for support and advice in the first quarter of this year, when compared to last with the following noted.

In the year ending 31 March, the charity supported 160 farming families, which is an increase of 10 per cent on the previous year.

Ten of its most recent cases were Covid-19 related, with its existing caseload impacted by additional practical and emotional issues.

LRSN’s project manager, Alison Twiddy said: “Although Lincolnshire’s farmers are perhaps more used to working in isolation, the added pressures of coronavirus are having a visible affect.

"Supply chain issues, for example the closure of Newark Livestock Market, staffing and vegetable harvesting problems caused by the social distancing, mean that farmers are under a considerable amount of pressure.

“We are incredibly grateful to everyone at Wilkin Chapman for thinking of us and for fundraising for our charity."

Poet Carolyn Doyley said that researching and writing the poem made her 'fall in love with Lincolnshire all over again'.

"It also proved a real eye-opener for me, for the first time I understood that the beauty that we see in the fields is managed and worked,” she said.

“It is wonderful too, that the poem is being used to raise awareness of a charity that helps people in our countryside.

"The loneliness and isolation that will be felt by some is something that many of us will not think about,” she added.