Video: Man sentenced after he filmed himself stealing sheep 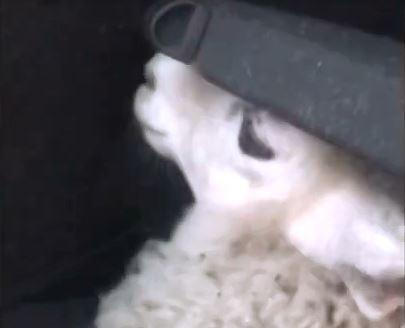 A man who filmed himself stealing a sheep from the banks of a Yorkshire reservoir before driving to Sheffield and releasing it has been sentenced.

Ali El-Aridi, 23, filmed himself chasing the sheep along the banks of Ladybower Reservoir in August last year.

When he eventually caught it, he directed an expletive-filled rant at the animal, which he recorded on his phone before uploading it on Snapchat.

El-Aridi, from Sheffield, then drove it to his home city and released it into a suburban area, again filming it all as he went.

The theft came to the attention of Derbyshire Police's Rural Crime Team after members of the public witnessed the theft from the other side of the reservoir.

Within a day, the sheep had been reunited with its owner, having been rescued from the Wincobank area of Sheffield by some of the local community, and El-Aridi was identified.

Police officers examined his phone and found the evidence he had filmed, as well as two extreme pornographic images.

He was charged with theft of the sheep and animal welfare offences – which he admitted – and possession of extreme pornography, which he denied but was found guilty of at Chesterfield Justice Centre.

PC Andy Shaw, from the rural police team, said: “El-Aridi initially denied stealing the sheep but after we had a look at his phone and found the video, unsurprisingly the next time we interviewed him his story was somewhat different.

“The sheer disregard for the animal’s welfare is plainly evident in El-Aridi’s video, and in fact he seemed to care significantly more about the mess it had made to his boot lining.

“This case was a great example of the police and the community coming together not only to recover the animal but also to secure a conviction.”

PC Shaw added: “It also shows that social media has real value in modern policing, and I hope it foes on to demonstrate to our rural communities that we are alert to crime and will take action to tackle it and put offenders before the courts.

On Tuesday 25 June, El-Aridi was sentenced to a 12-month community order and must complete 100 hours of unpaid work, as well as paying £620 in costs.

Livestock theft is an ongoing problem nationally and one that the police take seriously.

Single animals disappear in cases such as this but police forces across the UK also receive reports of animals being taken on a much larger scale.

Figures show that livestock worth £2.5 million were stolen from farms across the UK in 2018.