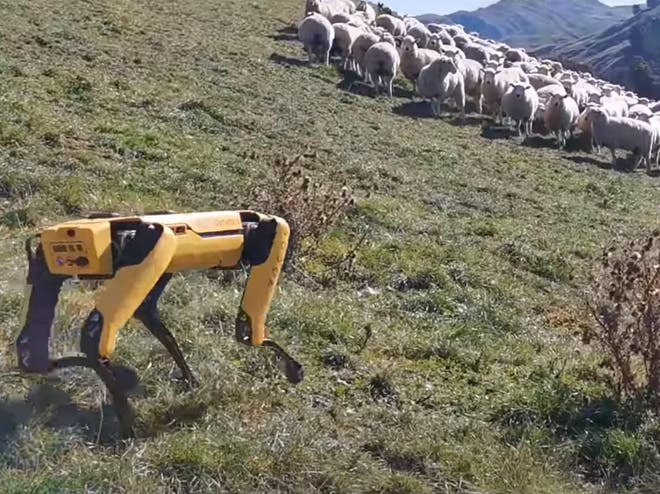 The robot's abilities include climbing stairs, travelling through challenging terrain, and even opening doors (Photo: Rocos/Youtube)

The world’s most advanced robotic dog is helping farmers in New Zealand to herd sheep, patrol farmland and undertake other tasks.

It has now been programmed with “remote mission” qualities to operate in hillside terrain as part of a project with robotics software firm Rocos.

The company has released a promotional video demonstrating Spot's potential in the farming industry.

In the video, Spot was controlled remotely to herd sheep across a mountainside in New Zealand.

The robot's abilities include climbing stairs, travelling through challenging terrain, and even opening doors.

"The use of autonomous robots in agriculture is increasing the efficiency of food production," explained the New Zealand firm.

"Robots, like Spot from Boston Dynamics, increase accuracy in yield estimates, relieve the strain of worker shortages and create precision in farming."

Rocos added that advancements in the droid means it is able to perform tasks that are 'dull, dirty or dangerous for humans'.

The robodog has also been seen recently patrolling a park in Singapore, advising people to practice social distancing.

It comes as technology experts forecast that agricultural robotics will become a $12bn industry by 2027.