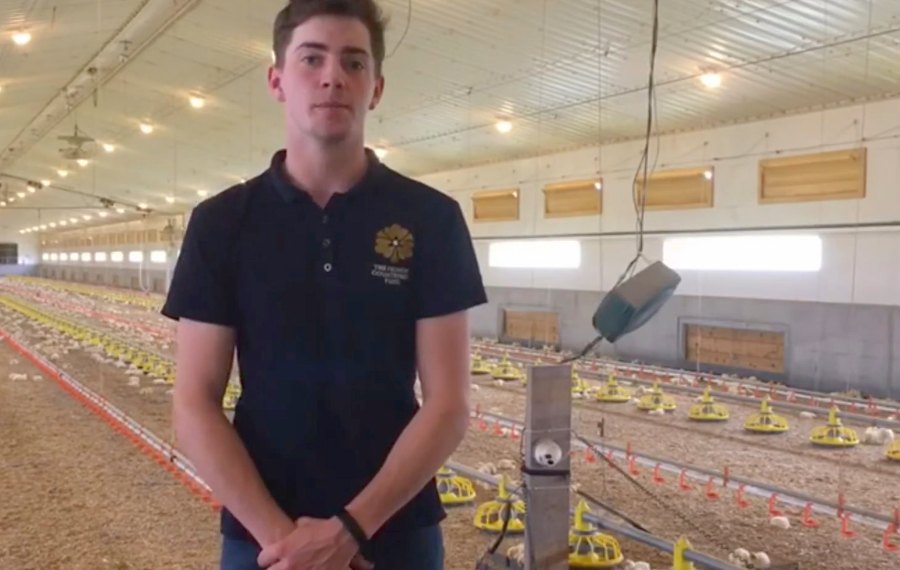 Elliot Cole, 19, explained how his farm used litter from 120,000 chickens as fuel for the on-farm biogas plant

Two young farmers have been praised for their climate friendly on-farm ideas which may help the industry reach its net zero by 2040 ambition.

William, 15, from a beef and arable farm in Herefordshire and Elliot Cole, 19, from a poultry and beef farm in Devon were chosen as the winners of YFC Climate Challenge.

The challenge, which was supported by Defra, asked the next generation of farmers to record a three-minute video, sharing ideas that could help the industry reach its goal.

William, winner of the under-18 age category, explained how his 200-acre family farm focused on staying local – and had even recently swapped its commercial beef breed to traditional Hereford cattle.

Along with using a local abattoir and selling the meat locally, the farm also used wood from the local forest and manure and slurry from a local dairy farmer to help build up organic matter in the soil.

William said: “If there’s something more economically, environmentally and socially sustainable then I go for that option.

"We are going to need to do something over the next 20 years otherwise we’re just going to be a melting pot.”

It was a similar sentiment from the over-18 category winner Elliot who is currently studying Agriculture Business Management at Reading University.

A range of ideas on his family’s poultry and beef farm, based on closed-loop farming, is making their business more sustainable.

In his short film submitted for the challenge, Elliot explained how the farm used litter from their 120,000 chickens as fuel for their on-farm biogas plant.

Similarly manure from their bulls was used in the biogas plant to make natural fertiliser, which in turn is used to grow the barley that feeds the bulls.

Elliot’s 350-400-acre farm is powered by a wind turbine and the biogas plant, and they have applied for grants from the Woodland Trust to plant more trees to encourage more wildlife and carbon storage.

Elliot said that if people talked more about climate change, the more likely action was going to happen: "Everyone really needs to be in the same mindset to make a difference. We’re all in it together.”

Judges from the Championing the Farmed Environment (CFE) and the NFU said they were impressed with both winners.

Ceris Jones, NFU Climate Change advisor and one of the judges, said: “We really liked how Elliot used what was happening on his farm across all three net zero pillars.

"He showed an insightful understanding of the importance of encouraging farming neighbours and the wider industry to take action and his entry was very well presented.

“We also really liked how William not only identified the carbon benefits of what’s already happening in the family business but was also looking to the future both on and off the farm.”

The success of this first climate challenge has encouraged organisers to involve other nations in the search for ideas.

The Climate Challenge is now open again for entries for over 18s in Northern Ireland and Scotland.