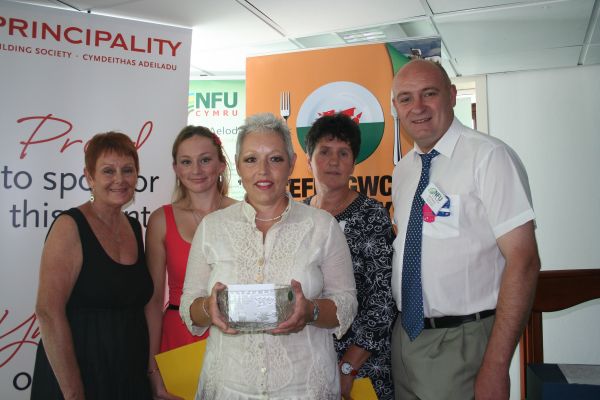 To celebrate the Award’s 18th birthday, Eleri Lloyd, along with Jane James from Pembrokeshire, the Award’s first ever winner, cut a celebratory birthday cake to promote the history of the competition which aims to celebrate the often forgotten contribution that women make to Welsh farming.

Eleri and her husband Haydn run a dairy farm with 300 cows, 200 followers and have adapted the New Zealand type system. They have also developed their own water engineering business which now employs 10 people, a B&B and a self-catering cottage. In her application Eleri said, “Women today are far more involved with the decision-making than their mother’s generation. They play a catalytic role towards achievement of a successful business.”

The runners up for this year’s Award are Maureen Hedley and Meinir Evans.

Maureen Hedley, is an assistant herdswoman for a 200 cow dairy herd in Pembrokeshire, she has also recently completed a degree in Agriculture at Aberystwyth University. On farm Maureen is in charge of the health and wellbeing as well as the daily milking of the pedigree Holstein cows, the rearing and replacement of heifers and the rearing of the beef calves. Whilst studying at Gelli Aur she won student of the year – twice.

Meinir Evans, Cwmfran Fawr, Cil-y-cwm, Llandovery, Carmarthenshire. Meinir’s application form explains her dedication, ability, strength and knowledge to run the farm day to day. Over the years she has turned her hand to anything: shearing, sheep dipping, silage harvesting, hedge laying, and breaking in horses. Meinir is best known for her success in shearing competitions, recently taking first place, with Aled Jones, in the Team World Woolhandling final, beating New Zealand (the first time they had not won in nine years).

NFU Cymru Deputy President, John Davies, said, “All three of the shortlisted finalists were of a very high standard. All three have one thing in common – complete commitment to the farms they work on and to the industry as a whole. However, we were unanimous as judges, as soon as we left Eleri’s farm, that she had to be the winner of the award this year. Eleri is a shining example of the old saying – if you want something done ask a busy person. She is a shining example for the title Wales Woman Farmer of the Year.”

Pat Ashman, Sponsorship and Events Manager, Principality Building Society said, “It’s a real pleasure to be involved with the judging of such an exciting competition. When choosing the winner the panel of judges looked at a number of different criteria including their part in making the farm a successful economic unit and their contribution to improving the role of women in farming. I have to agree with John, Eleri met all the criteria and surpassed our expectations. She will make a very good ambassador for all the other women who farm in Wales.”

The winner received a Welsh crystal glass engraved fruit bowl and £500, while the two runners-up received £100 each.