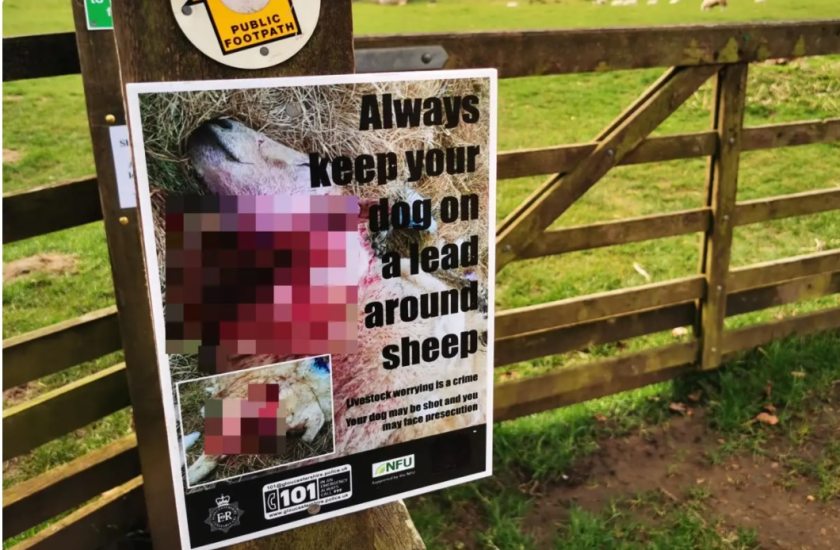 Police have urged walkers to keep dogs on a lead when near farmland (Photo: GlosPol_Rural/Twitter)

A police rural crime team has shared graphic photos of a dog that was shot dead by a farmer after it went on a 'killing rampage'.

Gloucestershire Constabulary showed the images on social media to encourage dog walkers to act responsibly when near livestock.

In the incident, a loose Husky attacked and killed numerous sheep in the Cotswolds.

In the post dated 18 March, the force's rural crime team said: "Is this upsetting and offensive? Probably, but this is what happened.

"The Husky was unfortunately shot whilst on a killing rampage.

"Keep dogs on a lead, it's lambing season."

Is this upsetting and offensive? Probably, but this is what happened. The Husky was unfortunately shot whilst on a killing rampage.
Keep dogs on a lead, it's lambing season!@NFU_Glos @CLAtweets@nfum@nfum_cotswolds.@natsheep @sheepwatchU. pic.twitter.com/LKPXpuicaZ

Newly-released figures show that the cost of dog attacks on livestock increased by over 10% to £1.3 million last year as the pandemic saw a surge in people visiting the countryside.

The Act considers sheep worrying to include attacking sheep, chasing them in a way that may cause injury, suffering, abortion or loss of produce or being at large in a field or enclosure in which there are sheep.

The National Sheep Association (NSA) says it recommends that farmers only shoot dogs as a last resort, as the legality depends on whether a farmer had a lawful excuse for shooting the dog in that individual circumstance.