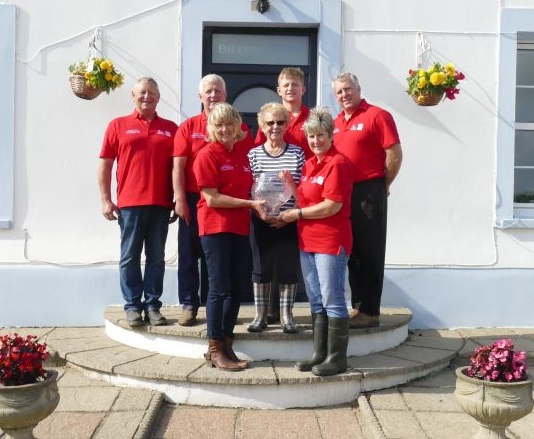 The Brynhyfryd herd, managed by the George family, are well recognised within the industry

Holstein UK have launched a new award to recognise those farmers that have made an exceptional contribution to cattle breeding.

The first recipient of the award is J W C George & Sons from South Wales who run the 1750 cow Brynhyfryd herd.

The George family have been stalwarts of the Friesian and Holstein breeds for over 60 years starting with Enid George and her late husband Colin in 1958 and continuing with their three sons Michael, Roland and Robert and grandsons James and Charles.

Michael, his wife Jill and son Charles have now taken over the running of Brynhyfryd home-farm, whilst the rest of the milking herd is at Sealyham Farm and is run by Roland, his wife Sharon and Michael’s eldest son James.

Robert George is a farm animal vet surgeon and a partner in Nantwich Farm Vets.

The Brynhyfryd herd are well recognised within the industry and soon became a household name breeding stock bulls that would be sold to breeders and AI studs alike.

Names such as Cardan, Emporer and Cascade had huge influence not just nationally but internationally.

Brynhyfryd have always valued the benefits of being pedigree and use classification to monitor progress and add value to the herd.

Their classification results show just how impressive the breeding in the herd is, with 67% of animals classified over the last 12 months achieving VG or above.

Over the years the family have also had success in the show ring. Brynhyfryd animals have been a regular feature as progeny groups on semen company stands throughout the country when other herd members were to be found competing and excelling in show classes everywhere.

Championships were won at most local, county and national shows including the Royal and Royal Welsh.

In 2002, devastatingly the Brynhyfryd herd succumbed to TB which saw them shut down for 15 years.

During this period the George family made the brave decision to expand moving from a 260 to 1600 cow unit. The family have always been forward thinking and innovative with a huge emphasis on breeding the best cows for the right job.

More recently, the herd has garnered headlines after being named by Holstein International (June 2018) as having the highest number of active excellent cows in the world.

Holstein International consulted the herd books of 16 countries before announcing the Brynhyfryd herd as being number one in the world with 233 EX cows.

Michael Smale Holstein UK Chairman said “I am delighted that Enid and the George Family are the first recipients of this award in recognition of their dedication to the Holstein Breed and their breeding success.”