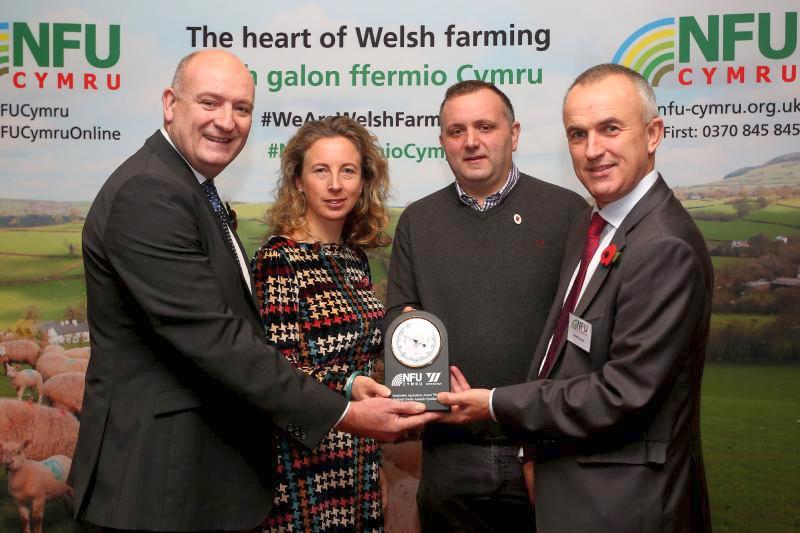 Jason Llewellin and family (centre) from St Ishmaels, Haverfordwest, have been announced as the winners of the inaugural Sustainable Agriculture Award

A Pembrokeshire farming family have been announced the new recipient of a major award which champions those farmers' who make a commitment to the wellbeing of Wales.

Jason Llewellin and family from St Ishmaels, Haverfordwest, have been recognised for their commitment to the economic, environmental, social and cultural measures.

Tave been announced as the winners of the inaugural NFU Cymru / Wynnstay Sustainable Agriculture Award.

Jason farms in partnership with wife Ros and his parents, Jim and Christine under the name J Lewellin and co. They have two children; Rebecca and Emma Rose.

Technology is a key part of farming at Trewarren and the Llewellins’ have a modern crop storage building which holds 2,000 ton of wheat which has an automatic temperature control system, keeping the wheat at its optimum quality.

Apps and precision tools are used to time and control applications of fertiliser and pesticides.

The cultivation policy on the farm is a managed tillage approach. The philosophy of the partnership is only to do what is necessary on the day, according to the field conditions that are presented.

Jason and family feel the benefits of this system are reduced fuel consumption and less soil disturbance, which inevitably benefits soil health and biodiversity.

The Llewellin family use advanced GPS technology to help grow the crops.

They also use a software programme to record all field applications and trading agreements for the sale of their crops.

The farm has five substantial ponds, originally created and maintained for the purpose of irrigation.

They now provide a rich haven for food and shelter as well as being breeding grounds for numerous species of wildlife.

In the last 20 years, the Llewellin family have planted 25,000 trees., and they have also constructed and planted 1,000 metres of hedges as field boundaries to provide wildfire habitat and shelter.

In addition, they have established streamside corridors and field margins and actively manage them to encourage wildlife.

Six years ago a 20kW wind turbine was installed along with solar panels to reduce the family’s reliance on fuel.

Honey bees have been kept on the farm for over 40 years and Jason and family now have barn owl boxes and smaller bird boxes which are all actively used.

The family are heavily involved in the local community with Christine being an active member of the local church.

Ros is also a Governor for Coastland CP Primary School as well as being treasurer of the PTA.

Ros has organised a number of curriculum based school visits to the farm and educated young people on the importance of knowing where their food comes from and how farming and the environment work hand in hand.

Hedd Pugh, NFU Cymru Rural Affairs Board Chairman, one of the judges for the award, said: “I’d like to congratulate Jason and the rest of the Llewellin family on winning this award.

“Their use of technology mixed with the dedication they showed to producing high quality food whilst maintaining, protecting and enhancing the environment makes them a credit to the agricultural industry.

“It was an extremely difficult competition to judge, with tough opposition from the other finalists, Rhug Estate and Slade Farm, who made this one of the hardest decisions I’ve had to make.”

Jason and wife Rosalyn were presented with a prize of £500 and a Welsh slate engraved barometer.