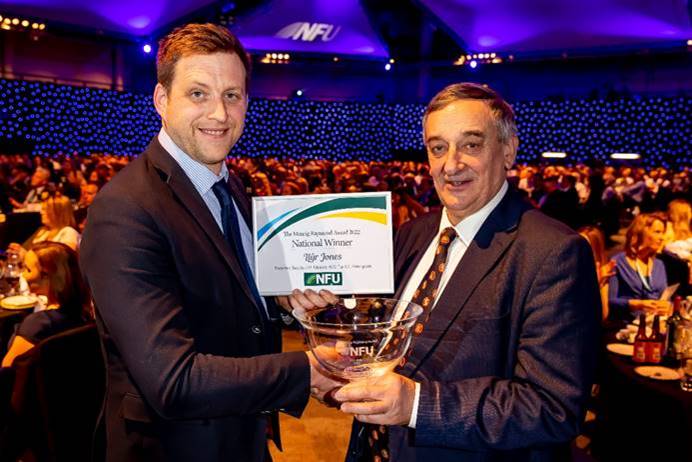 A Welsh livestock and poultry farmer has been honoured at NFU Conference for his dedication and commitment to the NFU and to the farming industry.

Llyr, who farms at Corwen, Denbighshire, is a member of the NFU Cymru Next Generation Group and regular contributor to local and county meetings and events.

He also produced a series of daily social media videos during Countryside COP week to highlight the sustainable methods he is using on farm.

These include renewable energy – the farm produces its own electricity through a hydro system - and tree planting and peatland projects.

Llyr said: “It is a huge surprise but a great honour to win this award. British farmers have a great story to tell. I’m very proud of producing fantastic quality food, producing renewable energy and caring for the environment.

“As a farmer I have a responsibility to leave my farm to my children in a better state than I inherited it. And that’s what I intend to do.”

“As well as running his own farming business in the hills of North Wales and being an engaged grassroots NFU Cymru member, Llyr is a brilliant advocate for the industry, promoting work on climate change and net zero, as well as regularly hosting local school children to explain the farm to fork story.

“Llyr’s hard work, dedication and positivity has made him a progressive voice for the farming industry and helped raise the profile of Welsh farmers and what they do best – producing food and caring for the environment.”

Llyr Jones, representing NFU Cymru, was selected from eight nominees drawn from each of the NFU’s seven English regions and NFU Cymru.