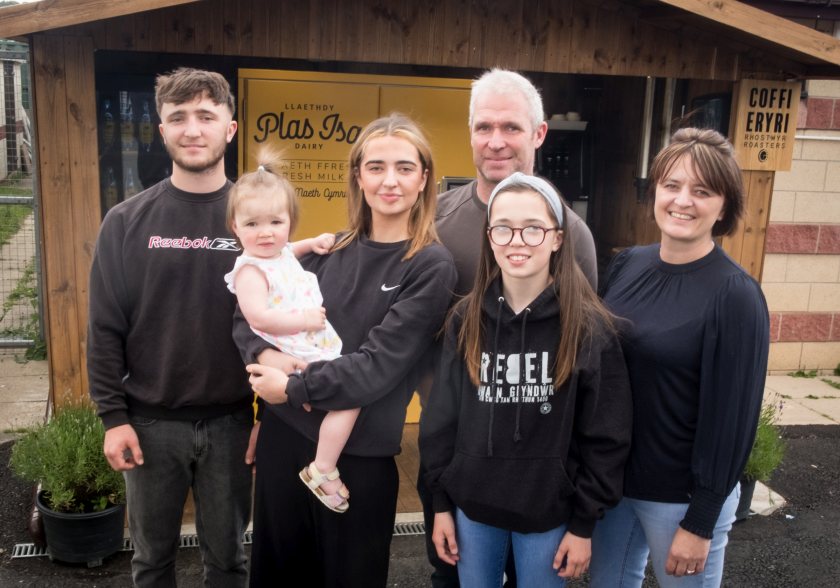 Football fans searching for a different match-day drink are queuing up for milk from a nearby family-run dairy farm after a local football team installed a vending machine.

Llaethdy Plas Isa Dairy’s vending machine outside Glan Conwy Football Club has proved such a hit that a series of table-top ‘filling stations’ have been installed at shops around the locality.

Two years ago, the Jones family decided to set up a dairy on their Llansanffraid farm and sell directly to the public after finding a gap in the market for locally produced milk.

Rachael Jones, who farms with her husband Huw, said: “We had our milk delivered, but it came from outside the area. We asked our milkman why it wasn’t local and were told there wasn’t anyone selling milk around here.”

Rachael and Huw began to look into how milk from her family’s dairy herd could be sold to the public.

Everything came together quickly, as at the same time they were discussing the new venture with Cywain, they heard about some much-needed specialist equipment that had become available.

“In the same week, we began talking to Cywain, we heard about the sale of a pasteurisation unit. So, we went there are ended up buying it. We built a large extension to our dairy and installed a cool room.”

Now all the milk is pasteurised on farm where it is divided between glass bottles, the vending machine, and local in-store table-top ‘filling stations’.

Also, plans are underway to supply a local milk-round with full fat, semi-skimmed, and skimmed milk, as well as banana, chocolate and strawberry flavours.

The business has led to the creation of one full-time and three part-time jobs, with the highly experienced staff having been employed previously at a local creamery which closed down.

Llaethdy Plas Isa Dairy’s vending machine is situated in a hut near the pitch at Glan Conwy Football Club. Just off the A470, it is easily accessible for customers and a hit with football spectators.

Rachael said: “When it is match day, it is really busy. We give people compostable BioPak cups made from plants, not oil – and which hold the same amount as a small bottle.

"We don’t want to use plastics, so we’ve made a conscious decision to use glass bottles and eco-friendly packaging.”

“The children are the tasters when we’re adding the flavours, and we’ve got special flavours lined up for Christmas and Hallowe’en.”

The milk is dispensed into a bottle – or the customer’s own container - to which they can add a flavour before paying at the shop’s till.

Throughout setting up the business, Rachael has received advice from Cywain – a project that works with food and drink producers across Wales.

“I’ve had a range of help from Cywain, branding, business plans, webinars, and generally being there when I need them; they have been amazing.”

“It's great to see what Rachael and Huw have already achieved. Creating employment and making use of valuable local skills that could otherwise be lost all adds to the positive impact their venture is having on the local community."