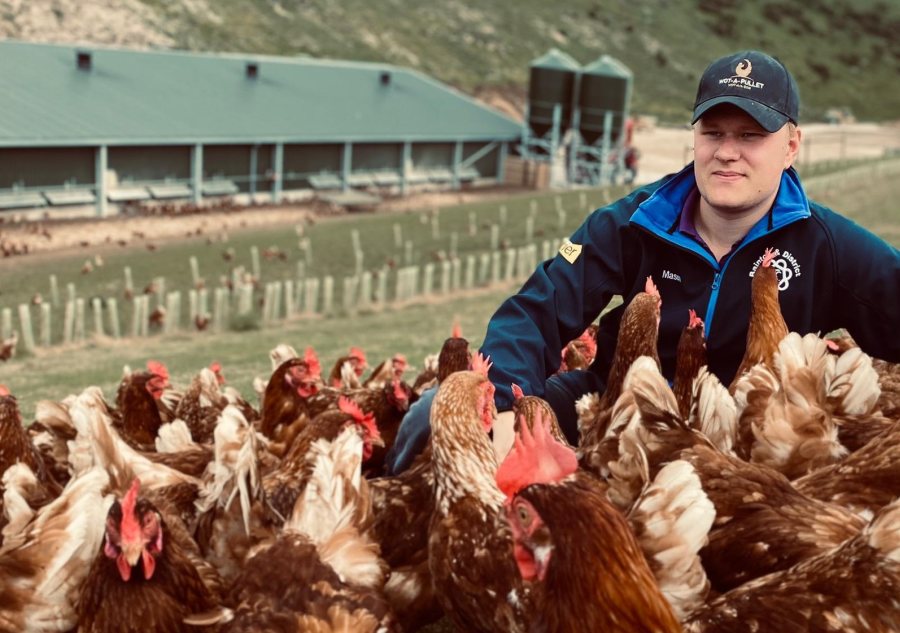 Henry Mason took on his first free range flock in 2019, and believes that taking a whole farm approach will help to prepare his family business for future challenges.

Set in the heart of the Yorkshire Wolds, the Mason’s family farm is predominantly arable, but is also home to a suckler herd, sheep, pigs, and most recently, a 64,000 bird free range flock producing eggs for Morrisons.

Henry is a big believer that these different enterprises can work together to create a more stable and efficient business, an approach he has tried to implement since returning to the family farm.

He said: “After I finished school, I went away and studied crop management at Harper Adams, and a lot of the course focused on sustainability, which got me thinking about how we could make the most of our least productive grassland.”

Once he had graduated from Harper Adams, Henry returned to the family farm: “My brother and I both came back home at around the same time, and had similar ideas about how we wanted to approach the business.

"We looked at how we could expand and decided to go down the poultry route because we thought it would fit well within the rest of our farming enterprises."

In 2019 they built their first 32,000 bird house and last year completed the construction of their second.

Henry said: “It was a very big investment, but we believe it allows us to be as efficient as possible, because we can run our egg packing room to its full potential, and has allowed our staff to work more efficiently.”

However, he admitted that the scale of the investment was daunting: “My knowledge of poultry was very limited, which made doing something on this scale, with such a huge start-up cost, very intimidating.

"But we wanted to ensure that we had the best possible system for our hens’ welfare in the long-term."

He also said that the biggest challenge was getting planning permission: “Planning was one of the hardest things and the extensive application for an environmental permit on the second in particular was extremely stressful and expensive.

“I am glad we persisted now, and we were fortunate to have received such good support from Morrisons both in the planning stages, but also in designing the houses and tackling the auditing and paperwork.”

In 2018 Morrisons acquired the Yorkshire based packer Chippindale Foods, adding to their integrated manufacturing model.

Henry explained that the ability to work directly with the retailer was one of the things that attracted him to Morrisons.

“In my eyes Morrisons have to be the most efficient option because they cut out the middle man.

"I would like to think that leaves them well positioned to react to changing markets and support their producers, for example during times when feed prices are particularly high.”

Since signing up with Morrisons, Henry has been impressed with the amount of influence producers have had.

“Producer meetings have had to be remote over the last year, but they have still provided a valuable platform for us to raise our opinions,” he said.

“Earlier this year producers were clearly facing unprecedented high feed costs at the same time as the egg market was booming.

"As a group of producers, we were able to form a listening group with some of the directors at Morrisons and we were offered longer-term contracts as well as a new feed tracker being developed.

"It is ideal to have that relationship with the retailer and nice that we now have an element of security against the volatility of the markets.”

Henry also supplies for Morrisons’ ‘Chuckle Eggs’ range which was set up following input from a producer meeting and allows customers to directly ‘give back’ to producers for the environmental work they are doing on farm.

As a result, Henry has 20% of his range planted with trees and a handful of bee friendly flower plots across his farm.

He said: “Schemes like this show that we as producers do have a say in the governance of how our eggs are farmed, whilst it is another thing to help us prepare for the future and look after the farm as a whole.”

As part of Henry’s desire to future proof the family business, he has been looking at ways in which he can reduce the farm’s carbon footprint.

This aligns with Morrisons’ ambitious aim of having all of their producers net zero on carbon emissions by 2030 and to be selling a net zero egg by the end of next year. 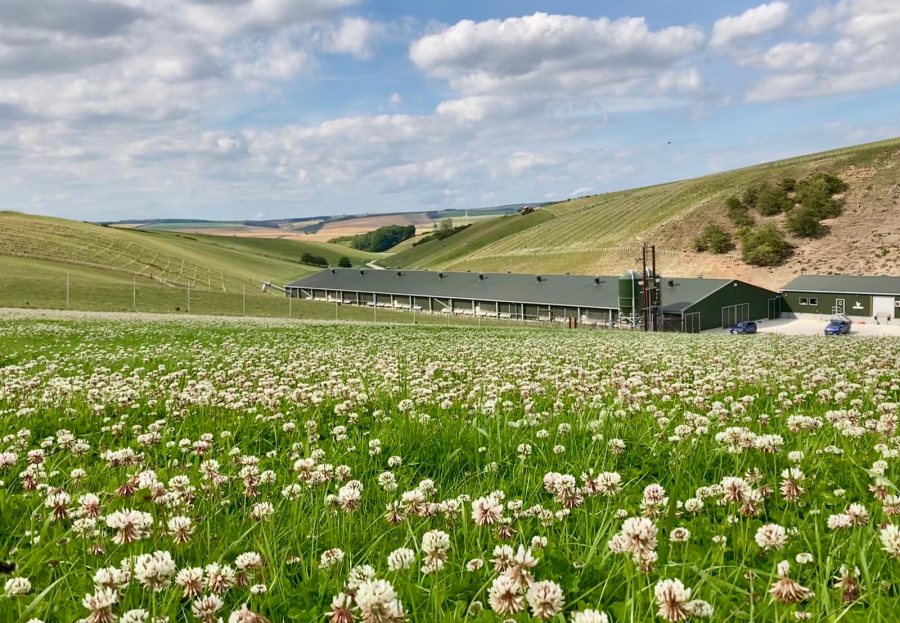 “Agriculture is clearly moving towards a net zero target and that is the way we want our business to go in terms of it being as sustainable as possible,” Henry explained.

“As well as our involvement in the ‘Chuckle Eggs’ scheme, we are also part of the early adopter group of Morrisons producers who are inputting data into Eggbase as part of a trial project to find the areas producers can best target to reduce their carbon footprint.”

As part of both Henry’s desire to reach net zero, as well as his whole farm approach, he has made investments in renewable energy.

He said: “We have installed a 200kw solar system that covers the roof area on the houses.

"We were surprised by how much electricity we were using in our first year and so we saw this as a way to tackle that and keep things in-house where possible.”

He added: “We also have air source heat pumps installed in the houses that heat the radiators in the egg packing house as well as a shower that we have installed.”

Recently Morrisons have partnered with Henry’s former university, Harper Adams, to set up a ‘School of Sustainable Food and Farming’, which will be centred on how to achieve net zero in agriculture.

Henry believes it can only be a step forward: “I hope that initiatives like this can help to bring some of the science and data that is out there into practice on a farm.

“For example, one area where this could potentially make a difference is in terms of manure management - we lose a lot of nitrogen when spreading poultry manure, so what can we do to enable the farmer to maximise that resource?"

“Initiatives like this can uncover better data and help direct farmers to manage their businesses better,” Henry added.

When Henry began to explore the possibilities of expanding into free range, he was surprised by the lack of courses and training available for him to learn about the poultry sector.

“I did a degree in crop management and my only experience with hens was the handful I kept when I was a boy, so I was throwing myself straight in at the deep end with this venture.

"Fortunately, I had a lot of support from Morrisons, but I found that the options available to learn about the industry were very limited.”

However, Morrisons, in association with 30 different companies and organisations across the industry, have launched the British Egg Academy at Bishop Burton College.

It is a one year course aimed at 16-17 year olds that hopes to get more young people involved in the laying sector.

Henry said: “I think this is just what the industry needs, the course involves a lot of work experience.

"Because there are so many partners, it means students can get a good understanding of the industry as a whole and decide what area they would like to be involved in.”

Henry believes that implementing his whole farm approach will continue to improve the business in the future.

“In our eyes it is about continuing to implement different enterprises that benefit each other in a symbiotic relationship," he said.

“For example, the manure from our poultry and livestock helps on the arable side, whilst we produce enough crops to feed our own stock.

"We do not mill and mix our own feed at the moment, but that is something I am interested in looking at going forward.

"The free range setup helps keep the business stable because of the consistent cashflow – we are getting paid every week whereas with the arable side you wait all year to sell something and cannot be sure what price you will get.

“We will keep striving as a business to become more efficient, by being open minded and looking at different things like manure management, the way we source our feeds, and even the possibility of diversifying beyond agriculture.”