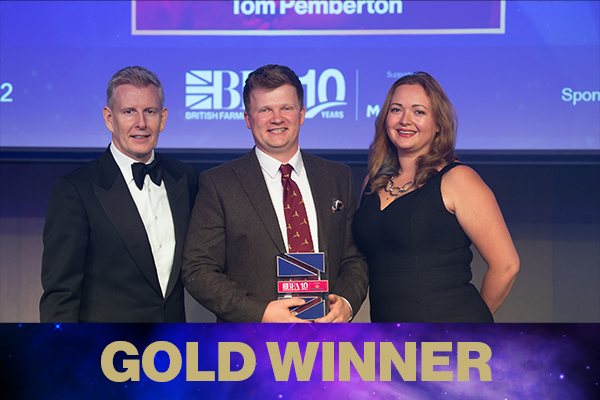 The winner of this year’s 'Farming Hero; Flying the Flag for British Agriculture' award went to young dairy farmer Tom Pemberton
Sign in to add your own press release SIGN IN Register

More than 800 farmers gathered at the British Farming Awards last night to honour the dedication and achievements of this year’s finalists.

Farmers from across the country gathered at The Vox in Birmingham for the event, which is sponsored by Morrisons and organised by Farmers Guardian.

There, more than 800 farmers and other industry professionals vied for the seventeen categories up for grabs.

Alongside core sectors including – dairy, beef, sheep, arable and machinery – there was also recognition for students, family farms, sustainable businesses, and new entrants.

His videos depict life on his family’s dairy farm, which have captured the attention of millions across the globe.

Tom Pemberton's Farm Life has secured a loyal following of consumers thanks to his endearing honesty and passion to promote the industry to the wider public.

His growing presence and big personality has proved to be a runaway success and he is part of a new wave of stereotype-smashing young farmers enjoying a public profile.

Tom has gone on to front BBC3’s new tractor-racing series The Fast and the Farmer-ish after his YouTube channel was scouted by producers.

The Outstanding Contribution to British Agriculture was awarded to the chief executive of the National Sheep Association (NSA) Phil Stocker.

Having recently celebrated 10 years of leadership at the NSA, Phil has represented a sector who have experienced unprecedented times, including Brexit, coronavirus and the impact of the Ukrainian war.

Phil has also championed increased use of advanced breeding techniques to promote genetic improvement, more innovative use of cross-breeding and at lobbying the needs and demands of UK sheep farmers at a national and political level.

At the ceremony, the ever increasing sophistication and developments within agri-technology was also recognised, with the category welcoming a record number of entries.

The audience was praised for their innovation and commitment along as food producers, innovators and custodians of the countryside.

Sophie Throup, Morrisons head of agriculture said: “The British Farming Awards are a welcome reminder of the dedication and hard work demonstrated by UK farmers all year round.

"At Morrisons, we have always valued British farming and the effort, innovation and skills which go into providing food farmed to the high standards that we all enjoy and is something we should be proud of.”

For more information about the winners, finalists and awards evening, visit the British Farming Awards website.