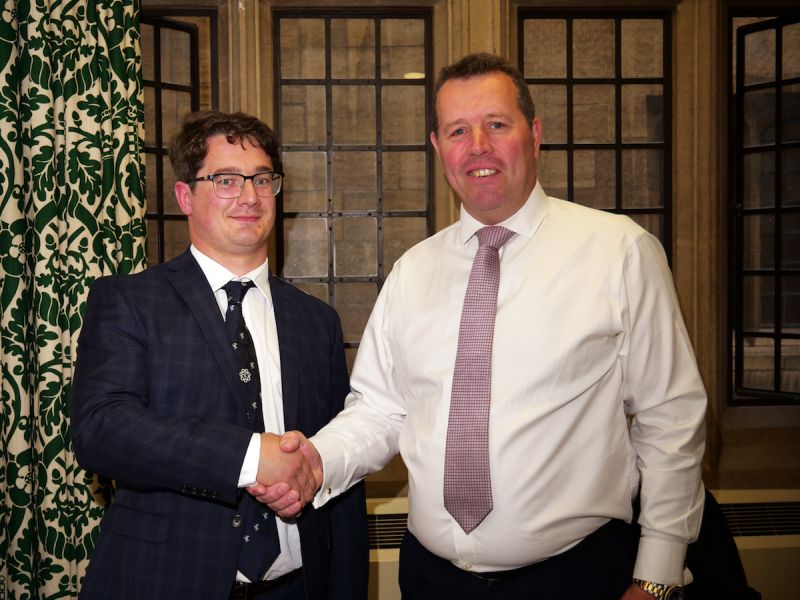 YFCs are 'fundamental' to rural communities, according to the Chief Whip and former NFYFC chairman (R)

Young Farmers' Clubs are 'fundamental' to rural areas because it gives young people a 'safe environment' to network and socialise, according to the Chief Whip.

The comments come as a week-long initiative highlighting the work of the UK's YFCs gets underway today (30 September).

The House of Commons Chief Whip and Tory MP for Sherwood, Mark Spencer, has shared his views on the clubs.

It has been 20 years since Mr Spencer was the Chairman of the National Federation of Young Farmers Club’s (NFYFC) after which he embarked on a career in politics.

After recently being promoted to the high profile position of Chief Whip, he has shared his views on the Federation.

Mr Spencer highlighted the role NFYFC had played in his own personal and professional development, as well as its part in developing young people today.

“I think they’re absolutely fundamental,” said Mr Spencer when asked about the role of YFCs in rural communities.

“Young people need somewhere to go, social activities to enjoy, the ability to network and socialise with each other.

“Young Farmers is the perfect platform to do that in a safe environment, in a structured way. It gets you out having fun, it gets you meeting people and socialising.”

As Chief Whip, Mr Spencer described his office as the “grease that makes parliament work”.

His promotion comes at a critical time for the country – and he said that serving as NFYFC National Chairman gave him valuable experience in dealing with difficult situations.

“It was a great experience and something that has prepared me for the bumpy ride that the nation is feeling at this moment in time. It’s one of the best roles I’ve ever done in my life,” said Mr Spencer.

The interview was recorded as a special message for YFC members to be released during National Young Farmers’ Week.

The initiative, now in its fifth year, aims to promote YFCs to more rural young people so they are aware of the benefits the clubs can offer them, namely by providing a social network and developing skills.

There are around 22,000 members of NFYFC, aged 10-26, who are all offered opportunities to take on roles in their YFCs, as well as get involved in the organisation at a county, area and national level.

The skills developed through NFYFC’s competitions, training, travel and agricultural activities are what inspired Mr Spencer’s political career – and moved him away from full-time farming.

“I still think of myself as a farmer, although I don’t get a lot of time to do that, but I think Young Farmers pulled me into politics slowly,” said Mr Spencer.

“You get drawn into young people’s issues, whether that is housing, rural transport, succession planning... you find yourself moving from thinking about rugby and socialising and drawn into those small ‘p’ political issues.”

During the interview, Mr Spencer also shared a message of support for National Young Farmers’ Week and urged future chairmen to “make sure you leave YFC there for future generations”.

The week-long initiative runs from 30 September to 4 October and is sponsored by NatWest.