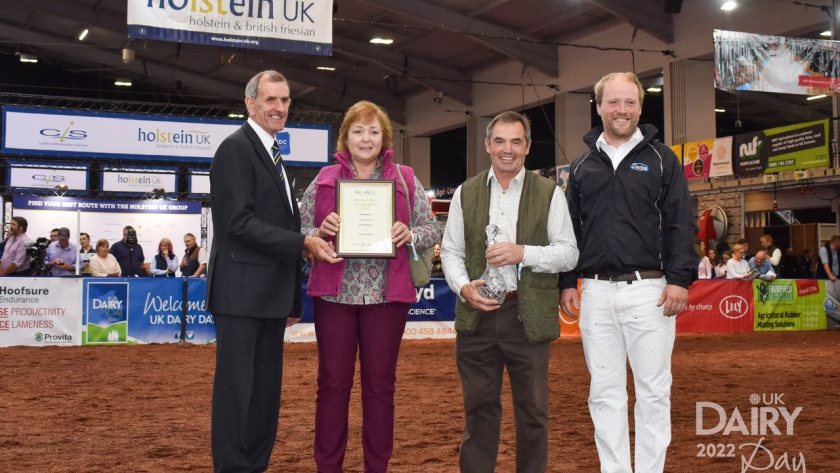 The Holstein UK Premier Herd Competition pits some of the best herds in the UK against one another (Photo: Holstein UK)
Sign in to add your own press release SIGN IN Register

The North Yorkshire-based Aireburn herd have been crowned as the winners of this year's Holstein UK National Premier Herd Award.

Brian and Judith Moorhouse, who farm in Skipton and who represent Holstein UK's Northern region, were presented with the highly acclaimed award.

The award, announced on on Wednesday (14 September) at UK Dairy Day, recognises the most outstanding Holstein herd in the country.

The winner of each individual Club’s herd competition competes against neighbouring clubs to become one of the seven regional winners and finalists in the National Premier Herd Competition.

The Aireburn herd was established in 1968 by the late George Moorhouse before moving to Hesper Farm in 1971.

There have been a number of on-farm sales over the years and unfortunately in 2001, most of the herd was lost to Foot and Mouth Disease.

However, 40 young heifers were retained which form the foundations of today’s herd. Prominent families include the Bevins, Dellias and Honeys and there are currently 97 animals classified as Very Good and 46 as Excellent.

The Moorhouse family, who won a Master Breeder Award in 2018, run a grass based herd with buffer feed in the summer months and TMR in the winter.

National Premier Herd Judge, and 2021 winner, Max Davies of the Davlea herd, visited the Moorhouses' farm. “These are my kind of cows," he said.

"The herd is exceptionally uniform with great balance of frames, exceptional width of chest and rump, combined with quality udders throughout the herd.

"I really admire how uniform the herd is and combined with being modern in size, they really would fit any system.”

Holstein UK Chairman Michael Smale added: "A commitment to producing quality, purposeful animals is reasserted and demonstrates the many years of dedication to the Holstein breed from the Moorhouse family.

"I would also like to congratulate B & V Davidson of the Errolston herd who were named as Reserve Champion and Riverdane Holsteins who are Honourable Mention."