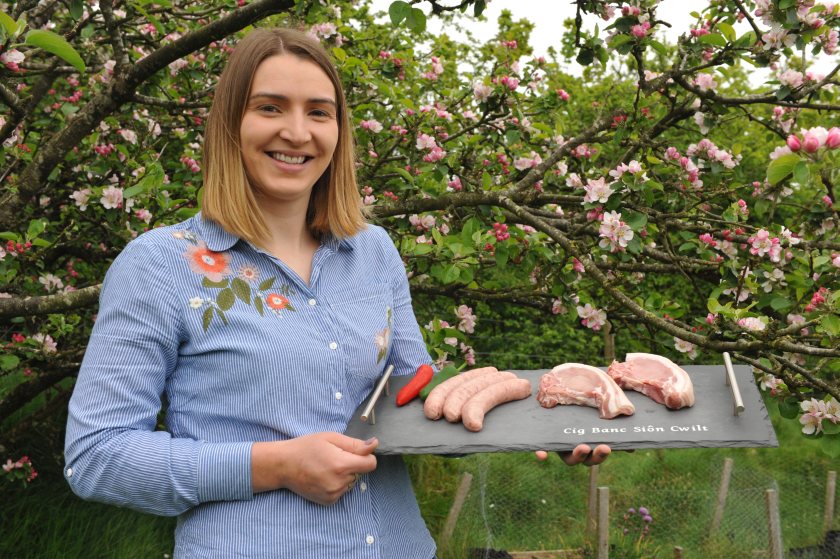 Rhiannon Davies has launched a direct meat sales business, Cig Banc Sion Cwilt, on the family farm at Talgarreg near Llandysul
Sign in to add your own press release SIGN IN Register

A young farmer has established a pig fattening enterprise and direct meat sales business thanks to a novel initiative that provided her with five weaners.

Rhiannon Davies, who grew up on a beef and sheep farm and is a member of Caerwedros YFC, says the support from Menter Moch Cymru was an important catalyst to getting her started in pig farming.

She was given five pigs, along with training and one-to-one mentoring on topics ranging from their day to day management to marketing their meat, after winning a pig finishing competition run by Menter Moch Cymru and Wales YFC.

The initiative culminated in her showing the animals at the Royal Welsh Winter Fair.

She said: “I always wanted to keep pigs but I’d never had any experience of working with them so to have the opportunity to have a go with the benefit of a network of support was extremely valuable.”

Rhiannon’s introduction to pig production was so successful that before those first five pigs had been sold she bought in a further four weaners.

Since then, she has launched a direct meat sales business, Cig Banc Sion Cwilt, on the family farm at Talgarreg near Llandysul.

She buys in five batches of weaners a year, all bred in Ceredigion and processed at Tregaron abattoir.

“I very much wanted the pigs to be born, raised and processed in Ceredigion,” she explains.

The competition allowed her to choose a breed and she opted for a Welsh pig. She has since switched to a Welsh x Pietrain and a Saddleback x Pietrain to reduce finishing times.

The animals are finished on a straw system in sheds on her brother’s nearby farm on a diet of wheat and barley sourced from a farm in Ceredigion, aiming for a slaughter weight of 70-75kg liveweight for porkers and 80-90kg for pigs reared to produce bacon.

Rhiannon has built up a strong customer base. “I have so many repeat customers which is nice because it means they are happy with the product.”

When she launched that business, Menter Moch Cymru stepped in with multiple opportunities for training in skills such as marketing, even product photography.

“There were so many courses and that really accelerated my knowledge which I wouldn’t have got had it not been for Menter Moch Cymru,” she says.

The meat is sold in boxes ranging from a full pig to a family pack.

Rhiannon is now in a discussion group facilitated by Menter Moch Cymru which gives her an opportunity to meet up with other pig producers on their own farms and to learn and share ideas - some have even set up a butchery on their farm.

She is also benchmarking after signing up to the Menter Moch Cymru and Farming Connect ‘Measure to Manage’ online programme to compare the performance of her business with others.

“It is especially important now, to have those figures in front of you, because the cost of feed has nearly doubled and we need to make sure we stay efficient and profitable.”