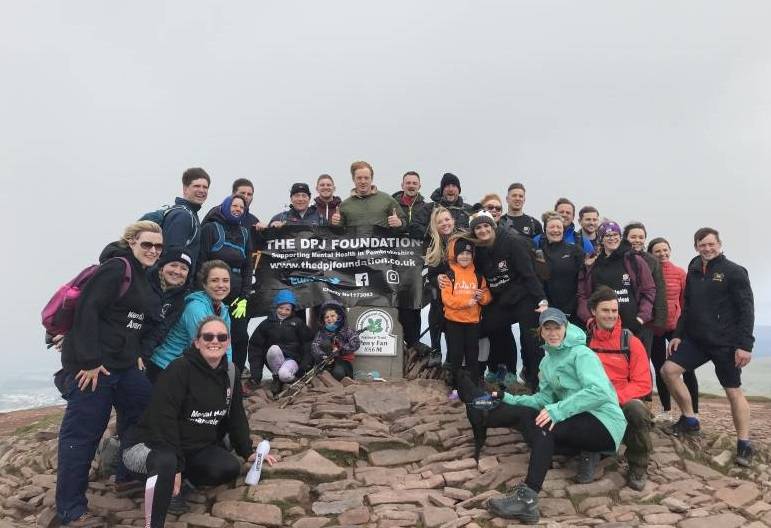 Young farmers have raised over £11,500 for a mental health charity after climbing up nine mountain peaks across the UK.

Welsh farmer Matt Launder, together with his brother Dan Launder and brother-in-law George Collins, climbed nine of the UK’s highest peaks in less than 72 hours.

The group raised thousands for mental health charity DPJ Foundation in the process.

Emma Picton-Jones, widow of a young farmer who took his own life aged just 27, founded the charity, which is keen to promote awareness of mental health in rural communities.

They battled the peaks in around 70 and a half hours, only sleeping briefly as fellow brother-in-law Gareth Owen transported them between peaks.

The group were joined on their final climb at Pen y Fan in the Brecon Beacons by more than 60 friends, family and supporters to cap a remarkable achievement.

During that final climb the group received an anonymous £4,000 donation that took their fundraising into five figures.

Following the completion of the challenge, Matt Launder, who came up with the idea for this unique test of climbing endurance, said he feels 'overwhelmed but very proud'.

“I feel that we’ve really achieved something for the industry and for people who work tirelessly to help others.

“I think the one thing that I’d take from this challenge has been that when I was feeling down and struggling I could lean on those three lads, there was someone I could go to for support and to talk to,” he said.

Matt’s brother, Dan, said the group had to overcome some testing conditions to achieve their goals.

He said: “Climbing Snowdon during the day is perfectly do-able, but at night in the driving rain, guided by head torches with no peripheral vision after only a couple of hours’ sleep it can become trickier.

“Similarly, Helvellyn was difficult as we set off around dusk but the rain clouds covered the moon and all of a sudden it was pitch black.

“We were so close to the edge that we had to leave glowsticks out so that we knew which side of the trail to walk on on our way back down.”

Fellow climber George Collins admitted that it was a steep learning curve for the group in tackling the nine mountains.

“The first climb of Ben Nevis was one done through sheer determination and a little bit of blissful ignorance.

“Our inexperience played a part in the first leg – we took everything we could possibly ever require up the mountain with us – including a foldable shovel – so lugging all of that stuff up the tallest mountain in the UK was making it hard for ourselves.”

He added: “On the next mountain all unnecessary kit came out, leaving only the bare essentials, and that was a game changer.”