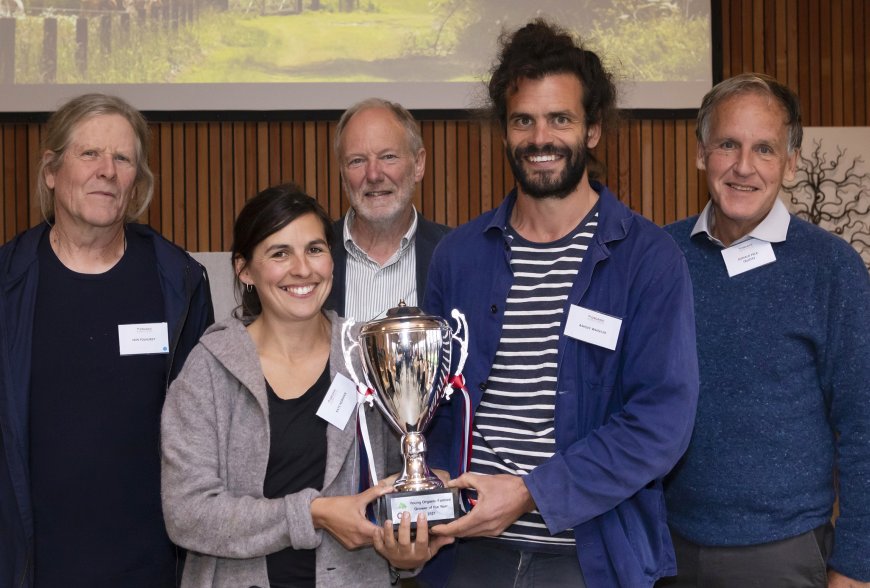 Two young organic farmers from Devon have been praised by the sector for their attention to good soil management and for boosting biodiversity.

The inaugural Young Organic Farmer of the Year award was launched by the Organic Research Centre (ORC) at its 40th anniversary event.

It was presented to Devon growers Ashley Wheeler and Kate Norman of Trill Farm Garden, Musbury, Devon, who have managed the farm for 11 years.

The site is far from ideal in terms of vegetable cropping, having a high water table and difficult drainage issues, yet they have consistently produced quality crops with good yields.

Soil management has been key to their success, along with innovative use of green manures.

Widespread utilisation of biodiversity integral to farm cropping has also demonstrated a clear commitment to working with natural systems.

They have also been a source of inspiration for many new and aspiring small-scale producers.

Ashley has been involved in setting up the Landworkers Alliance, the Seed Sovereignty programme, the Mentoring Programme, and the Traineeship Programme.

The judges recognised their commitment to organic principles, along with their quality vegetable production despite a farm with a high water table and poor drainage.

They were also commended for their commitment to ongoing training, including their support for the numerous organisations.

Commenting on his success, Ashley Wheeler said the farm had a focus on soil management, seed sovereignty and organic production methods.

"Organic farming principles offer an opportunity for mainstream agriculture and horticulture to embrace nature-friendly farming and deliver sustainable and resilient food production across the UK.

"That’s why we’ve been focused on supporting training schemes and mentoring young people as they embark on their careers in the industry,” he said.

The award was presented at an event to celebrate ORC’s 40-year contribution to farming and agri-policy, held at the FarmED centre in the Cotswolds.

More than 100 members of the industry attended the event, with presentations on the future of organic farming and priorities for research.

Lucy MacLennan, ORC chief executive, congratulated the young farmers for winning the award, adding that this year was 'pivotal' for the future of British farming.

"We push the boundaries by exploring no input agricultural practices to deliver truly sustainable food production for the whole agricultural community."