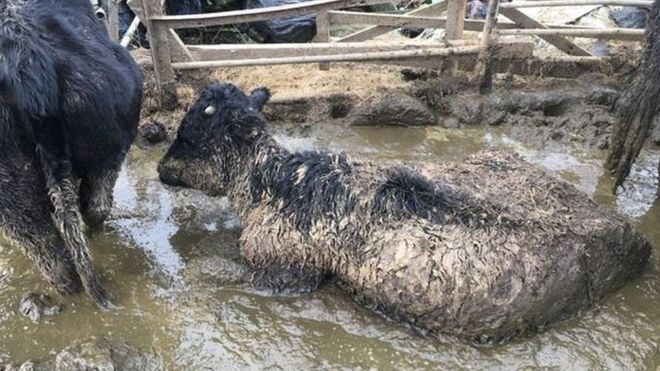 Cattle were drowning in muck, so emaciated they could not stand up and in many cases close to death (Photo: Cornwall Council)

A farmer responsible for one of the worst cases of animal neglect seen by a judge has now been banned from keeping livestock for life.

Rodney Pascoe, 65, of Under Lane, Delabole, appeared at Bodmin Magistrates Court to answer ten charges of causing unnecessary suffering and failing in his duty of care to his animals.

Mr Pascoe pleaded guilty to all charges, which were bought before the court following a joint investigation between by the Animal and Plant Health Agency (APHA), Rural Payments Agency and Cornwall Council.

Passing sentence, District Judge Diana Baker told Mr Pascoe that this was the worst case she had seen in years.

The court had heard how animals were found in an awful condition, with cattle drowning in muck, so emaciated they could not stand up and in many cases close to death.

Mr Pascoe was banned for life from keeping or owning farmed animals to include horses and poultry, and was handed a 16 week prison sentence, suspended for 18 months.

He was also told to either sell, or remove from his land, his remaining cattle within 28 days, and ordered to pay costs of £4,952 to Cornwall Council within the same period. He was also handed an additional victim surcharge of £115.

Jane Tomlinson, Cornwall Council’s Trading Standards Manager, stressed that this case is not typical of the high standards that farmers in Cornwall usually uphold.

“It is regrettable that prosecution action had to be taken in this case against a farmer based in Cornwall,” she said.

“However despite attempts by the relevant agencies to advise him, he failed to provide the most basic needs for his animals.”