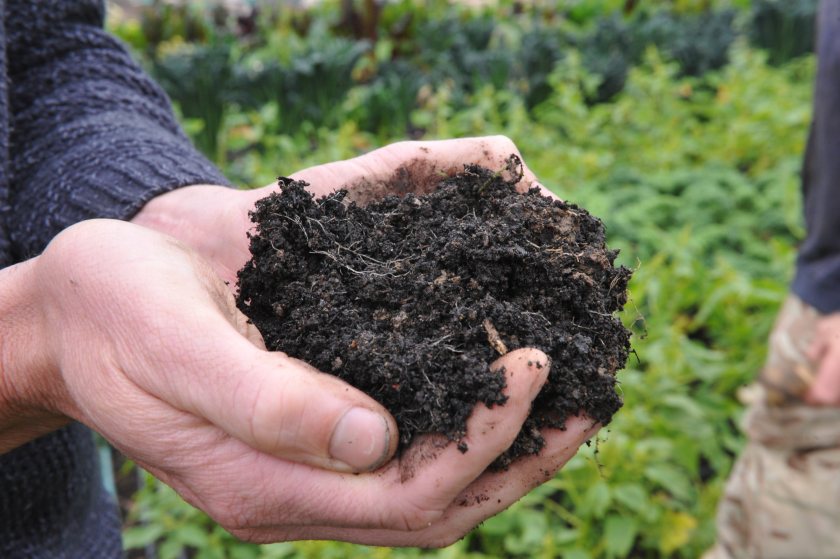 Biochar, a type of charcoal produced during pyrolysis and known to increase carbon sequestration, was put to the test on four sites
Sign in to add your own press release SIGN IN Register

Adding biochar charcoal to a low nutrient compost has been shown to increase vegetable performance by an average of 14.8% over two growing seasons in market gardens in Wales.

Biochar, a type of charcoal produced during pyrolysis and known to increase carbon sequestration, was put to the test on four sites as a European Innovation Partnership (EIP) Wales study.

During an open day at one of those sites, the results showed a strong case for applying biochar mixed with a sheep’s wool compost.

Both the biochar, made from Molinia grass, and the compost were produced by Tony Davies on his farm in Powys.

When a combination of biochar and compost was applied at 30t/ha, the trial showed a 14.8% increase in crop performance on average across all sites and vegetable types when compared to the control plots.

Biochar alone, incorporated at 10t/ha, achieved an 8.2% increase. For the plots where only wool compost was applied, at 30t/ha, yield reduced by 7%.

The trials involved crops of radish, basil, courgettes, maize and cabbage and 14 experiments were conducted with each of the applications at different rates, to compare to control plots.

Oliver Kynaston, a consultant with expertise in this area, oversaw the trial and analysed the results.

He told growers attending the open day that biochar compost had a moderate positive impact in both years when averaged across all sites.

The greatest positive effect on plant performance was in low-quality soils during periods of water stress when applied at rates of between 20-40t/ha.

“Adding biochar to the soil during these trials has been shown to be good for crop performance," he said.

“And when growing conditions are quite poor, for instance in the heat of summer when there is not quite enough moisture, the crops grown with biochar and compost performed twice as well because it improved the water holding capacity of the soil.

“It has real benefits for acidic soils and also works very well in sandy soils that don’t have great water holding properties."

The performance of biochar and biochar compost was found to be greater in the second year than the first, indicating that biochar remains stable in the soil and is likely to provide a stable structure for beneficial fungal and bacterial communities.

Mr Kynaston believes further research on the benefits to nitrous oxide emissions and crop performance on using biochar to stabilise volatile animal waste, such as cow slurry and poultry manure, would be beneficial.

But he could see benefits from using biochar going forward, if it could be produced on a commercial scale to make it cost comparable to other nutrient sources, he said.

“Even with no dig gardening you need inputs because by growing you are taking nutrients out of the soil," he explained.

“This trial has shown me that biochar could be an input to consider going forward when it is more readily available and affordable."

Mr Roberts used it to grow leafy green cabbages in soils with existing high levels of organic matter and a neutral pH.

Mr Kynaston said the high quality soil may explain the relatively small impact of the biochar applications on crop yield – application of biochar alone resulted in a slight increase in yield and biochar compost in a moderate increase.

Overall, cabbage yields were better in the second year. The best results achieved during the trial were in globe radishes grown in pots in poor quality hill soil amended with biochar and compost.

The results in both years showed that adding either biochar or compost improved yields significantly compared to the control.

In the second year, the highest application of biochar, at 40t per hectare, produced a yield difference of 91%.

The poor quality soil was the most obvious explanation, said Mr Kynaston – soil analysis revealed a very low phosphate (P) concentration in the soil and biochar is known to be a source of P, depending on the input substrate.

Biochar is also known to have a liming effect which may be beneficial to crops growing in very acidic soil, he added.