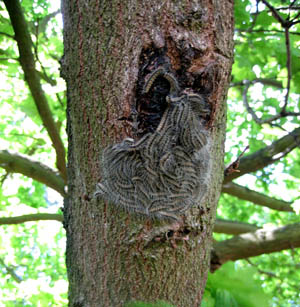 And they want the public to help by reporting sightings of the caterpillars (the moth's larval stage) or its nests.

Oak processionary moth (Thaumetopoea processionea) - a native of southern and central Europe - turned up on trees in west and south-west London last summer, and has begun breeding in oak trees in a number of locations there, including Kew Gardens.

The caterpillars - the larval stage of the moth's life cycle - pose twin problems. They severely defoliate oak trees by feeding on the leaves, and their tiny hairs are not only sharp and barbed, but also contain a toxin that can cause irritation and allergic reactions in people, even after the hairs have been shed by the caterpillars.

Contact with the toxin most commonly causes intensely itchy skin rashes, but can also cause sore throats, eye problems and breathing difficulties. These can happen because people touch the caterpillars, and it is also possible for the wind to blow the shed hairs so that they come into contact with people's skin or eyes, or are inhaled.

Now the Forestry Commission, working with Defra, the Health Protection Agency London, and Ealing and Richmond Councils, has drawn up an action plan. This will aim to determine the geographical extent of the infestation with a view to developing a strategy to reduce or eliminate young larvae (caterpillars) soon after the eggs hatch next spring, before the moth spreads out of London and becomes permanently established in Britain.

Teams with special training and equipment - including protective suits - will spend the next few months finding the moths' nests, using pheromones (an artificial lure that attracts male moths) to monitor flying moths, and surveying for eggs laid on branches.

"We believe we still have a good chance to get rid of the oak processionary moth while it is confined to this part of London and before it spreads any further.

"If it is allowed to get established it will cause problems not only to Britain's much-loved oak trees - and possibly to other tree species that it can also attack - but also to human health.

"It does not kill trees - they usually recover - but it would add another, unwelcome stress to Britain's oaks, which in some areas are already under stress from conditions such as oak decline and drought. So from woodland owners' point of view, it makes sense to try to prevent its spread while we still can."

"If it becomes established here, as it has in other European countries, a lot of people might get a very itchy skin rash, and a few will get more-troublesome symptoms such as itchy eyes and breathing problems.

"Thousands of people have been affected in The Netherlands. If it does become an on-going problem in this country, we would have to advise people to avoid affected oak trees during the peak months. So we welcome the work of the Forestry Commission and the local authorities to try to eradicate this threat, and we will be working closely with them.

"Advice is being issued to GPs and other health professionals in Ealing and Richmond to help them to identify when patients have been affected by the caterpillars' hairs, and to advise them about appropriate treatment.

"Anyone with a severe reaction, or who is uncertain what has caused their rash, should consult their GP."

"Richmond and Ealing Councils have built up a good picture of where the affected trees are, but we're still keen for members of the public to report any sightings of the caterpillars or their nests to Forest Research. The more we know about, the better our chances of success.

"We would stress, however, that people should not try to deal with the nests themselves. Even old, disused nests can be hazardous, because they can be packed with large numbers of the caterpillars' hairs and shed skin, so this is a specialist task needing properly equipped and trained people to ensure that it is done as effectively and safely as possible."

Apart from the continuing danger from nests, the peak danger period for human health is from April to June, after the caterpillars have hatched. The caterpillars then pupate in the nests in late June and early July and emerge from the pupae as moths between one and two weeks later. The moths lay their eggs in oak trees in July and August. The eggs hatch as caterpillars the following spring, and start feeding on young leaves. This is the best time to use active control measures.

The caterpillars feed together in groups and, when not feeding, they congregate in a communal nest made of white silk webbing spun under a branch or on the trunk. The nests are typically about the size of a tennis ball, but can be larger.

The moth gets its name from the caterpillars' habit of moving about in the trees or on the ground in long, nose-to-tail processions.

Anyone who thinks they have found oak processionary caterpillars, or their nests, should report their sightings to Ealing or Richmond Council or Forest Research (the Forestry Commission's scientific research agency), giving as precise details as possible about the location. An Ordnance Survey grid reference is ideal, otherwise an accurate postal address, including the full postcode, and/or a clear description of the tree's position in a field, park etc, is helpful. Digital photos sent with emailed sighting reports can help experts to confirm the sighting.

To report sightings in Richmond Borough, call 020 8891 7994 or e-mail commercialeh@richmond.gov.uk;

Sightings can also be reported to Forest Research, telephone 01420 22255; christine.tilbury@forestry.gsi.gov.uk.