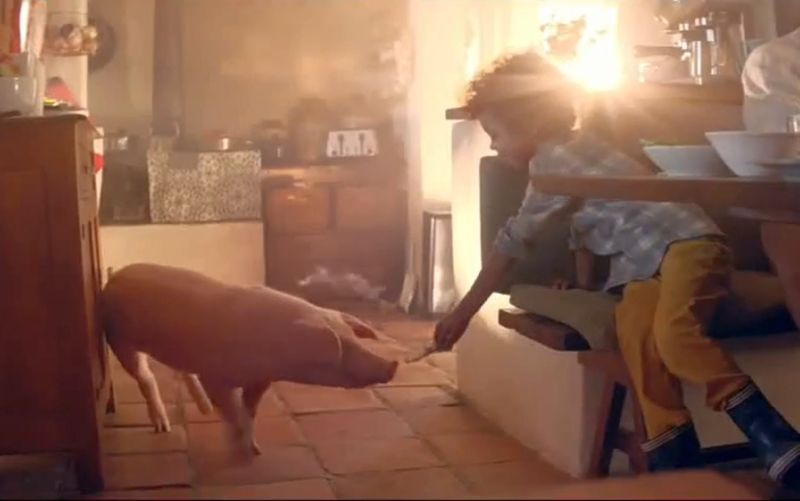 The pig sector has concerns that Amazon's advert encourages 'swill feeding', which has been banned in the UK since 2001

An advert by online retailer Amazon which shows a pet pig being fed kitchen scraps has raised eyebrows in the British pig sector.

The advert for the Amazon Echo Dot, which is being shown in cinemas, features a small boy feeding his pet pig uneaten food from his plate.

Because of disease concerns, the National Pig Association (NPA) has issued a complaint to the Advertising Standards Authority (ASA), pointing out that this is classed as swill feeding which has been illegal in the UK since 2001.

The swill feeding ban was imposed after pigs fed infected waste food caused the ‘devastating’ 2001 foot-and-mouth disease outbreak, which resulted in the death of millions of farm animals and cost the UK economy £12 billion. Swill feeding became illegal throughout the EU in 2002.

The UK is currently on high alert for African swine fever, which, like foot-and-mouth disease, can be spread via infected meat.

NPA chief executive, Zoe Davies said: “What really concerns us, is not just the fact that the ad appears to encourage an illegal act, but the fact that we have another disease spreading through the EU, all over China and several other Asian countries called African swine fever (ASF).”

She stressed that ASF survives for a long time in meat and has been spreading from country to country as people inadvertently take meat from affected countries and allow pigs to gain access to it.

“We do not have the disease in the UK and we are working really hard with other industry groups and the government to try and keep it out by attempting to educate the public about the illegality and the risk of feeding kitchen scraps to pigs,” she added.

“This advert undermines all those efforts and because of the advertising budget, will be seen by a much wider audience.

“We also have a large smallholder and pet pig community in the UK and we know from studies that feeding kitchen scraps, despite being illegal is still practised, so the risk is already present,” she said.

She called for the ASA to help the pig industry in preventing this advert from being shown and ‘keeping ASF and other awful notifiable diseases out of the UK pig population’.