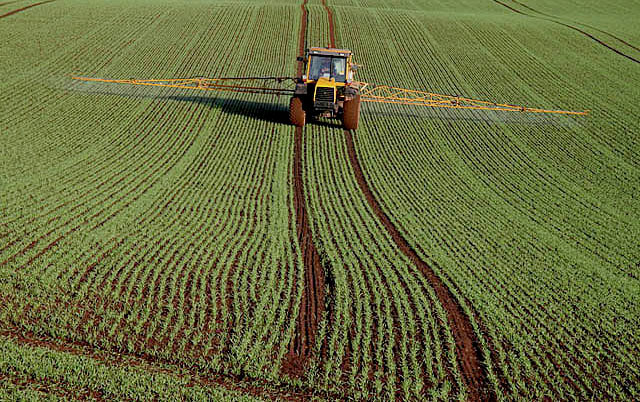 A new snapshot member poll has revealed this year’s wheat harvest is likely to be smaller than last year, while short-term confidence among arable farmers is at a new low.

The poll reveals the overall harvested area on the farms in the poll is on course to be almost 30 per cent lower than in 2012, following on from HGCA figures showing winter wheat planting area was 25 per cent down. It comes following a year of unprecedented extreme weather which has battered crops, underlining the importance of farmers access to crop protection technology, and for the government’s implementation of CAP not to disadvantage English farmers.

Figures in April had already revealed the area planted with winter wheat was down by a quarter on the previous year.

In a separate NFU survey nearly half of arable farmers interviewed (45 per cent) were less confident about the prospects facing their farm business in the next 12 months compared to last year.

NFU combinable crops chairman Andrew Watts said: “A myriad of factors have hit arable farms this year, from the extreme weather through to news that there will be restrictions on neonicotinoids to come in the future. Our poll is a snapshot but it is extremely worrying that planted area remaining viable for 2013 harvest on those farms looks set to be 29 per cent smaller than last year. If this plays out nationally, we will be below average production for the second year in a row.

“The saving grace in past years has been crop protection technology, which can help maintain yield potential and all important grain quality by guarding against pests and ensure crops are more drought and flood resistant. However, with the march by lobbying organisations to force restrictions on the use of neonicotinoids and potential restrictions on triazoles, it is hardly surprising to see that short-term confidence is so low.

“If the experts are to be believed and extreme weather is to become more frequent over the coming years, we must look at ways of supporting the industry. Crop protection technology must be embraced to help safeguard our harvests in years to come. After lower volume and quality from the 2012 crop put pressure on cashflow and profitability, the signals we are getting indicate these difficulties will continue after 2013. We urge the UK Government to support English farmers with its implementation of the CAP reform, which must not put us at a disadvantage compared to other EU farmers.”

"Latest figures to be released from Brussels show just how bad a deal the UK Government has secured for the Country’s pillar two rural development programmes," the NFU said today.

The numbers confirm that the UK will be allocated the lowest share of funds of all member states on a per hectare basis and will also face significant reductions compared to the current budget.

Speaking at the Cereals event today, NFU President Peter Kendall said: “Despite all of the rhetoric we have heard from Government about the importance of the pillar two rural development and ministers’ willingness to fight for a fair deal for English farmers, negotiators have come back from Europe with less than we started with.

“The UK will retain the unenviable position of being allocated the lowest share of all member states on a per hectare basis. In the first year of the new programme, we will see our allocation cut by 16 per cent, rising to cuts of 27 per cent in the final year. That’s 22 per cent less over the seven year period compared to rolling on the 2013 budget over that same period. By 2020, UK farmers will see less money coming back to the UK than they contributed across into the pot by way of the compulsory EU modulation transfers in 2013.

“At the same time as UK allocation has decreased, other countries like France, Italy and Ireland have successfully managed to secure special offerings from Brussels. The French got an extra €1 billion, the Italians €1.5billion and even the Finnish managed an extra €600million.What did the UK get? The power to mask these budget cuts by further disadvantaging UK farmers through increased voluntary modulation rates from their current levels of 9 per cent up to a maximum of 15 per cent, with no co-financing requirement. As the former agriculture Minister, Sir Jim Paice, said on the BBC last week in reference to this situation “the issue of a level playing field just will not exist”.

“Defra Ministers persistence in their determination to disadvantage English farmers through maximum voluntary modulation transfers in the next CAP may shore up budgets, but will also greatly exacerbate the difference in payment levels between us and our competitors.

"A Somerset or Shropshire dairy farmer is already disadvantaged to the tune of €235/ ha compared to a Dutch dairy farmer. I just don’t buy Ministers’ arguments that cutting English farmers payments by more than our competitors will leave us in a better position to compete. It will leave English farmers more vulnerable to the volatility we have seen in markets and weather over the past few years and make their businesses less resilient compared to our European competitors.

“The irony is not lost on me that this Conservative-led Government is actively looking for ways to take money off UK businesses first and will then decide how to spend it second, defying every principle of sound financial management. I want the Government to trust farmers to invest the CAP support that we do receive in a way that helps contribute to jobs and growth, not design costly and complex schemes to deliver that money back to the very same people they have taken the money off in the first place.”