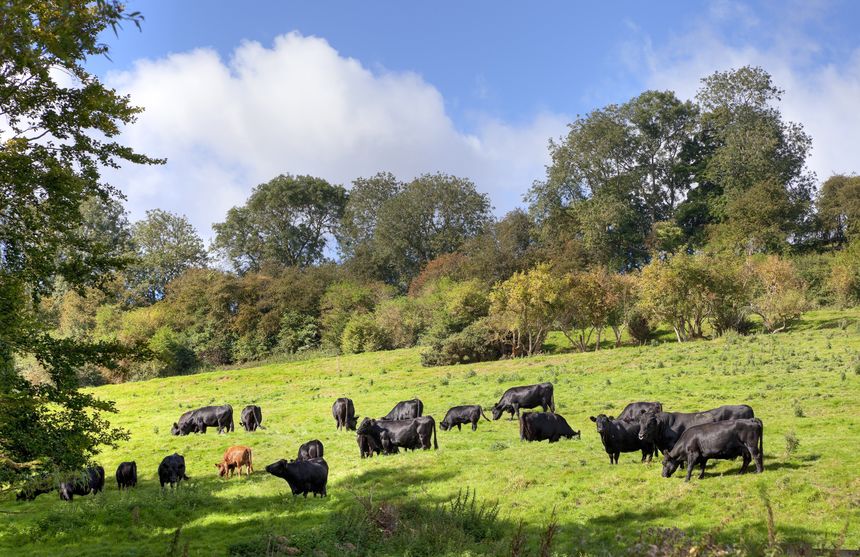 Emissions from UK beef are half that of the world average, the NFU points out

The public must cut the amount of meat and dairy they eat by a fifth in the next decade, according to the Climate Change Committee's new report.

Climate change advisers have laid out proposals today (9 December) to help reduce the UK's greenhouse gas emissions over the next 15 years.

The Sixth Carbon Budget includes measures which aim to change the way the British public eat, travel and heat their homes.

The release of the report is part of a push by the government to bring emissions down by 78% by 2035 compared to 1990 levels.

On the topic of meat consumption, the report urges the public to opt for 'plant-based options', which in turn would reduce livestock numbers and help cut emissions.

"Consuming more of a plant-based diet can reduce non-communicable diseases like diabetes, heart disease and a range of dietary-related cancers, which in turn can lower the risk of developing severe complications from Covid-19," the Committee says.

But farming groups have been left disappointed with the suggestion, with the NFU saying it 'overlooked the fact that people can continue to enjoy meat at the same time as reducing their footprint'.

“In Britain we already produce some of the most sustainable meat and dairy products in the world," NFU Deputy President Stuart Roberts said.

"British farming has an ambition to be net zero by 2040 and the NFU’s plan outlines how we can achieve this while maintaining, if not increasing, our production of climate-friendly food."

According to the union, greenhouse gas emissions from UK beef are half that of the world average, a figure which is 'continually improving'.

A report released this week concluded that the carbon footprints of Welsh beef and sheep farms were amongst the lowest in the world.

“It is important that we all understand the significance of where and how our food has been produced and choosing the most sustainable option," Mr Roberts added.

"If you want to continue eating quality, nutritious red meat and dairy while also doing your bit for the planet, it can be as simple as buying British and checking where your red meat has been sourced when eating out."

Industry body Dairy UK expressed 'extreme disappointment' with the recommendations, as the role of dairy in nutrition and livelihoods had been 'ignored'.

“Dairy provides vital nutrition to consumers, such rich nutrition in fact that no one other product naturally matches the range of vitamins and minerals found in dairy.

"Encouraging a reduction in dairy could leave many consumers struggling to replace the valuable package of nutrients they get from dairy and paying higher food bills in the process."

Other suggestions in the report include a ban on the sale of oil-fired boilers by 2028 and gas boilers by 2033, and stopping the expansion of UK airport capacity.

All car and van sales should be fully electric by 2032, and the report advises a ban on the sale of new diesel trucks and lorries by 2040.