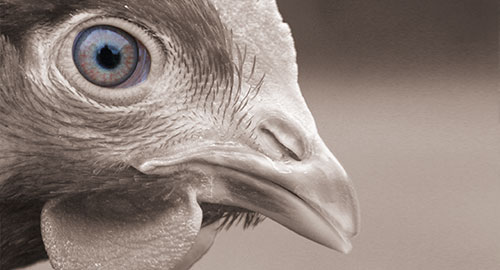 Beak trimming will no longer be used on laying birds after August 1, 2016, although there are concerns about the economic impact on egg producers

The German egg industry has put a figure on the cost to producers of banning the use of beak trimming in layer flocks.

As reported previously in the Ranger, egg industry leaders in Germany have reached agreement with the Federal Government to end the practice. Beak trimming will no longer be used on laying birds after August 1, 2016, although there are concerns about the economic impact on egg producers. It has now been estimated that the cost could amount to more than €1.50 per bird for producers having to manage flocks without beak trimming.

Professor Hans-Wilhelm Windhorst of the University of Vechta in Germany - a statistician with the International Egg Commission (IEC) - confirmed the figures to the Ranger during the IEC’s September conference in Berlin. He said the German egg industry thought the cost of managing non-beak-trimmed flocks would be €1.57 per bird. Contrary to some rumours, he said that egg producers would not be receiving compensation from the German Government for the resulting losses.

“Germany has 42 million birds. It would be a huge cost, “ he said. “Producers are hoping that retailers will be able to get a higher price for eggs from birds that have not been beak trimmed.” However, he said initial indications were not good.

“The number one food retailer in Germany ran a test, offering eggs from non-beak-trimmed birds at a higher price. They did not sell very well. Consumers say they are willing to do anything for bird welfare but, once inside the store, they buy on price.”

German Government Minister Dr Maria Flachsbarth, told delegates at the Berlin conference that across Europe there had been in a rise in consumer expectations. “In Germany, in particular, we have had an intense and, at times, highly emotive debate.” She said that Germany had banned conventional battery cages two years before such a ban was introduced in the rest of the European Union at the beginning of 2012. She said she hoped there would soon be a breakthrough to enable an end to the culling of male chicks. And she said that the German egg industry had agreed with the Government to end beak trimming. “I would be pleased to see this practice become a thing of the past everywhere in the foreseeable future.”

In the United Kingdom, the industry is currently waiting to see what the Government at Westminster will decide to do about a potential beak trimming ban. A proposed ban was originally due to come into force in 2011, but was deferred by the Government on the advice of the Farm Animal Welfare Council (FAWC). FAWC said it was concerned about the impact on cannibalism and injurious pecking if the ban went ahead at that time. When it deferred the ban, the Government said that the issue would be reviewed in 2015 with a view to a ban being imposed in 2016.

Since the ban was deferred, trials have been taking place to find ways of managing commercial egg laying flocks without the use of beak trimming. However, severe outbreaks of injurious pecking on trial units overseen by the University of Bristol have reinforced the view in the British egg industry that a ban should not go ahead at the moment. A 16,000-bird free range trial flock in East Anglia had to undergo emergency beak trimming after injurious pecking resulted in a mortality rate of 20 per cent. On another free range trial unit in Yorkshire the mortality rate hit 15 per cent amongst birds whose beaks were left intact.

Like the United Kingdom, in Germany table eggs are mainly produced by brown birds, which are much more prone to cannibalism and injurious pecking than white birds. In Denmark, where a voluntary beak trimming ban has already been introduced, the flock consists mainly of white birds. But professor Windhorst said that only about 15 per cent of table eggs in Germany were from white birds.

When news emerged of the agreement to ban beak trimming in Germany, Leo Graf von Drechsel, president of the German Central Association of the German Poultry Industry, called for harmonisation of the rules throughout Europe so that German egg producers would not be disadvantaged. He said the ban would require enormous effort from the industry, including financial effort.

In the UK, egg industry leaders have been pressing the Government to defer introduction of a beak trimming ban once again. The British Free Range Egg Producers’ Association (BFREPA), the British Egg Industry Council (BEIC) and the National Farmers’ Union (NFU) all agree that a ban should not go ahead until geneticists are able to deliver a bird that is capable of being managed without using beak trimming.