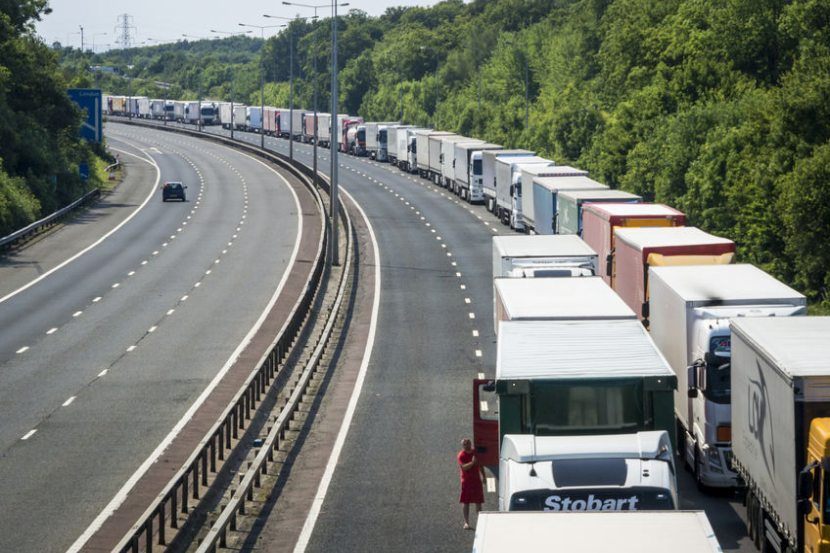 The possibility of lorry delays in Kent after the Brexit transition period ends would be 'catastrophic' for the UK-EU pork trade, British pig producers warn.

Mr Gove, who is responsible for no-deal planning, set out a ‘reasonable worst-case scenario’ of ‘maximum queues of 7,000 port bound trucks in Kent and associated maximum delays of up to two days’.

This is based on an assumption that up to 70% of freight trucks travelling to the EU could arrive unprepared for new border controls when they come in at the end of the transition period on 1 January.

The EU is expected to impose full goods controls on the UK, stopping all freight without the correct documentation at border control points, with new checks required regardless of whether the UK strikes a trade deal with the EU or not.

According to Mr Gove, if businesses are not prepared this will cause problems at the busiest ‘shorts straits’ routes Dover to Calais and in the Eurotunnel, with both imports and exports disrupted to a similar extent.

The disruption is predicted to build in the first two weeks of January, and could last three months or longer should France apply Schengen passport checks on hauliers at Dover and the Channel Tunnel, he said.

The government is encouraging exporters, such as farming businesses, to prepare now for the new border checks to try to avoid this level of disruption.

In a letter to business organisations, Mr Gove said: “Irrespective of the outcome of negotiations between the UK and EU, traders will face new customs controls and processes

“Simply put, if traders, both in the UK and EU, have not completed the right paperwork, their goods will be stopped when entering the EU and disruption will occur."

The letter adds: "It is essential that traders act now and get ready for new formalities."

UK pig producers say it reinforces concerns about the implications for trade in pork products, cull sow carcases, and live breeding animals from the start of next year, particularly if there is no-deal.

Europe is an important destination for UK pork exports, accounting for half of the total value of shipments in 2019.

NPA chief executive Zoe Davies said Mr Gove's announcement was a 'real concern' for the UK pig sector – the two-way trade in pork products was 'critical' and disruption could be 'catastrophic'.

“We urge traders and hauliers to do all they can to ensure they have the right documentation, but it would be wrong to pin the blame on industry for this," she added.

"These efforts have been hampered by a complete lack of information on exactly what is required by government – they are not blameless here.

“There are numerous issues still to be addressed... from the lack of suitable border control posts and available vets in Calais to facilitate live exports to questions over export health certificates and labelling."