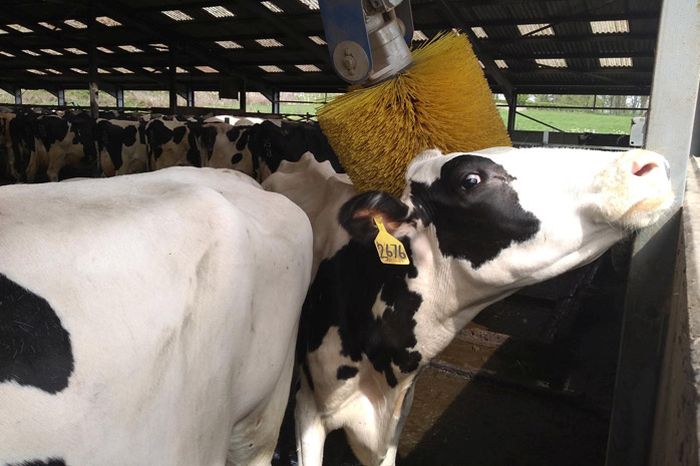 A dairy cow using an automatic brush on the farm

Dairy cows are as up for a bit of self-grooming as the most dedicated Instagrammer, according to farmers interviewed for research into positive animal welfare.

Researchers have combined a review of scientific findings on what contributes to positive welfare in dairy cows, and interviews with farmers about their views.

Cows readily use automatic brushes, suggesting they find self-grooming pleasurable, with one farmer saying: “I think it is the best bit of fun cows have. I just can't see it getting any better than that.”

Giving animals choices is also likely to enhance welfare and can be provided by practices such as robotic milking, where cows choose when to come inside or go out, according to Scotland's Rural College (SRUC) researchers.

Other practices which promote wellbeing in dairy cattle include maintaining social groups so cows aren’t mixed with unfamiliar animals – something that has been found to lead to increased aggression and negative effects on feed intake and milk yield – and also positive human-animal interactions.

The research briefing, published by Alistair Lawrence, Marie Haskell and Belinda Vigors, is based on interviews with 13 dairy farmers using different systems, combined with a review of the scientific literature on positive animal welfare.

“One idea about positive animal welfare is that it is more than prevention of the unpleasant, for example pain or fear, and involves thinking about how to allow animals to have positive experiences on a regular, perhaps daily, basis,” the researchers write.

“The good news is that there are practices already in use by dairy farmers which evidence would suggest promote positive welfare in cows.”

In a separate paper looking at sheep, researchers reported similar findings with the management practices of farmers – such as recognising the importance of play, positive social interactions and the bond between ewes and lambs – found to be in keeping with the scientific understanding of positive welfare.