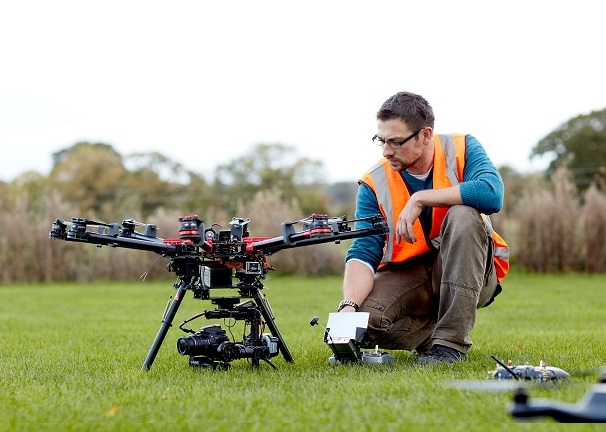 Investment in spray drones for agriculture could unlock major benefits, parliamentarians were told

MPs and peers have been warned that bureaucracy and red tape are holding back the use of spray drones on agriculture.

Parliamentarians also about the opportunities the use of spray drones could present, including reducing fossil fuels and increasing the transparency of food provenance.

Harper Adams University Researcher Jonathan Gill spoke to MPs during a meeting of the All-party Parliamentary Group on Science and Technology in Agriculture.

Drawing on his work as part of the Hands-Free Hectare, he explained how drones can be used to distribute plant protection products.

He also raised some of the current regulatory burdens which are holding back their use.

Mr Gill said: “The regulatory issues we are facing are with the Health and Safety Executive and Chemicals Regulation Division, and are more about the products the drones are distributing.

“Yet used correctly, an operator or farmer can know where, when, and how much chemical is distributed to an area, which allows the provenance of the food produced to become ever more transparent while reducing chemical usage.

“Despite this being done in a much more targeted manner than some conventional delivery, there are still regulatory issues, both with the use of drones and with research."

Drones, being fully electric, can also be charged by wind or solar – cutting the need for fossil fuels entirely and making significant reductions to the carbon footprint of spraying.

Mr Gill also re-iterated the need for investment in getting smart spray and drone systems to the point where they are authorised for use, with testing and efficiency confirmation at the top of the priority list.

He said the use of drones in agriculture offered significant opportunities to improve the precision and efficiency of both crop and livestock production.

“The session highlighted a number of areas where the UK’s ambition to be a global leader in precision agriculture does not appear to be matched by a proportionate regulatory approach.

“That information will be extremely valuable in identifying options for a more enabling regulatory environment to support the safe and effective use of drone technology in agriculture.”