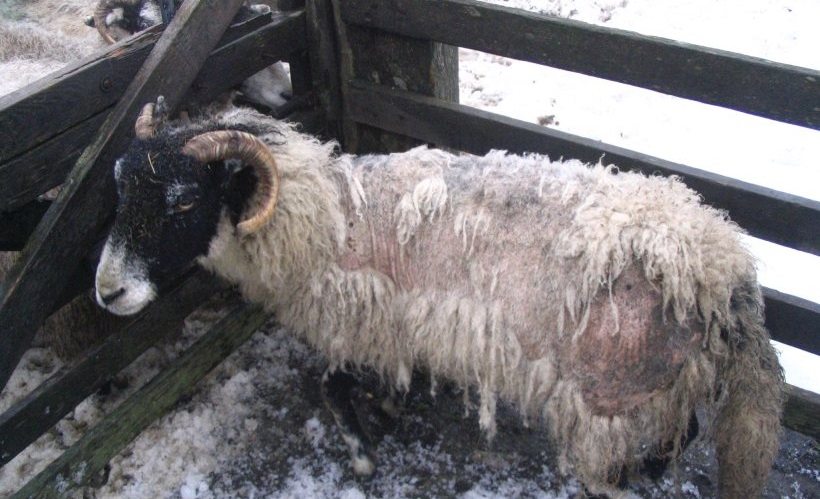 Sheep scab is highly contagious and has profound financial and welfare implications in areas where it is endemic worldwide (Photo: NADIS)

Sheep farmers, contractors and prescribers have been advised to plunge dip their flocks to treat scab over any other treatment.

A new campaign has been launched reminding sheep farmers, contractors and prescribers that Organophosphate (OP) can only be used as a plunge dip.

The Sustainable Control of Parasites in Sheep (SCOPS), which launched the campaign, said the number of scab cases would increase into autumn and winter.

Lesley Stubbings of SCOPS said: “We must make sure that when OP is used that it is fully effective, and the only way to achieve that is with a plunge dip.”

In 2018 cases of resistance in sheep scab mites to the injectable products were confirmed.

Since then there has been an increase in the number of flocks using OP, which once used correctly will remove resistant mites from a flock.

“However, it is clear that despite warnings to the contrary, there are still instances where farmers being sold OP and are then using showers, jetters or sprayers to apply the product to sheep,” said Ms Stubbings.

“This results in the survival of some mites, leaving sheep infested and able to spread scab when apparently they have been treated.

"Even more worrying is the risk that this sub-lethal exposure to a treatment will result in the development of mites that are resistant to OP, which is our last line of defence.” she added.

Hybu Cig Cymru – Meat Promotion Wales (HCC) said it fully supported the announcement, and as part of the Stoc+, which is an animal health project that works with farmers, it wanted to encourage producers to follow SCOPS' advice.

Ian Rickman, a Stoc+ farmer from Llandeilo runs 400 ewes and 100 ewe lamb replacements and has been plunge dipping his flock for a number of years.

“Over the summer months, the ewes graze on the Black Mountain and I gather them from the hill late September/October," he said.

"As part of the farm’s biosecurity protocol, I plunge dip all of the ewes on their return from common grazing using a mobile dipper prior to tupping.

“Dipping as soon as the ewes return to the farm prevents scab from being passed on to other sheep on the farm. I find that dipping is the most effective way of preventing this.”