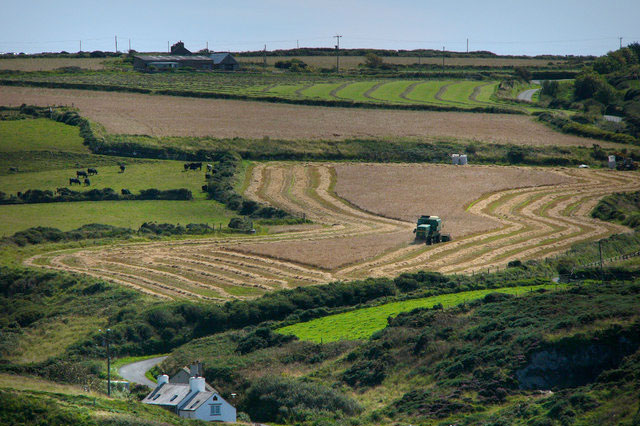 More emphasis on environmental protection, mandatory top-ups for young farmers in all member states, stronger farmers' organisations and less red tape when spending EU funds. These are the main lines of the agreement on farm policy struck on Wednesday by the European Parliament, Council and the Commission. Decisions still need to be taken on capping direct payments to bigger farms and distributing funds between farmers.

"The political agreement we reached today is a victory both for EU farmers and consumers. This is the first time Parliament has been involved in the reform of EU farm policy as a full co-legislator and we proved that we are fully capable of doing the job. We managed to improve the proposals while defending Parliament's mandate," said Agriculture Committee chair and head of Parliament's negotiating team Paolo De Castro (S&D, IT).

"The CAP of the future will be fundamentally different and the dependency culture of the past is now a thing of the past. We have managed to ensure better environmental protection and avoid double funding. The MFF-related issues are still open, as Council did not have a mandate to negotiate on them, but these will be finalised once the EU's new long-term budget is approved," said Luis Manuel Capoulas Santos (S&D, PT), rapporteur for direct payments and rural development.

Emma Hockridge, Head of Policy at the Soil Association said: "The final outcome of the CAP reform process is good news for organic farmers and we welcome the extra support and recognition given to the sector. The UK Government must now follow the lead of other EU countries in supporting organic farming, for example by developing innovative schemes as part of the Rural Development Programme. Countries that already do this have seen the area of organic farming increasing, providing many wider public benefits, and their organic markets have thrived, even during the global recession”.

EU funds only for active farmers

To ensure that direct payments go only to active farmers, MEPs persuaded Council to draw up a blacklist of entities, such as airports or sports clubs, to be automatically excluded from EU funding unless they prove that farming contributes to a substantial share of their income.

Under the agreement, 30% of member states' budgets for direct payments may be spent only if mandatory greening measures are carried out. However, the measures will be implemented gradually and linked to farm size. The three key measures are crop diversification, maintaining permanent grassland and creating "ecologically-focused areas".

To give an extra boost to greening efforts, Parliament's negotiators won an agreement to earmark 30% of total rural development spending for environment-related measures.

Under the deal, "double funding", i.e. paying farmers twice for delivering the same set of environmental benefits, is scrapped. In addition, farmers who fail to apply mandatory greening measures will face additional sanctions on top of losing their greening subsidies.

"We must allow farmers to familiarise themselves with the new rules before we start applying any sanctions. It is not fair to penalize them from the start. Therefore, no sanctions will be levied in the first two years after the new CAP enters into force. During the third year, the penalty of 20% will apply and one year afterwards it will be raised to 25%," said Giovanni La Via (EPP, IT), rapporteur for the financing, management and monitoring regulation.

To attract more young people into farming, Parliament insisted on a mandatory EU-wide scheme to give farmers under 41 years old an extra 25% in additional top-up payments for their first 25 to 90 hectares. Small farmers could also get more money if member states decide to set up a specific scheme for them.

MEPs insisted throughout the negotiations that farmers' organisations should be given new tools to help farmers cope with market volatility and strengthen their price bargaining position. EU competition rules applicable to the agricultural sector should be made clearer and applied uniformly across the EU.

"Additional tools to strengthen farmers' bargaining positions, but also to anticipate and manage crises, are necessary given the weaker role public authorities play on the EU agricultural market. This was a crucial objective of Parliament and has been largely met," said Michel Dantin (EPP, FR), rapporteur for the common market organisation regulation.

Parliament secured an option for member states to establish a legal framework for the contractual relations governing delivery of farm produce from farmers or processors. They could also choose to establish a supply management system for ham and cheese products registered under a protected designation of origin (PDO) or protected geographical indication (PGI) to improve their quality. Farmers' organisations in sectors including olive oil, beef, milk, cereals and protein crops should be allowed to negotiate supply contracts on behalf of their members.

Sugar quotas will be extended to September 2017 rather than expire in 2015, as originally proposed. Parliament also succeeded in maintaining the current vine-planting regime until 2030.

"I welcome the agreement on sugar and wine but I regret that the other institutions were not able to come on board for further measures to help the dairy sector after the current quota system expires in 2015. Nevertheless, I am looking forward to continuing this debate during the conference organised by the Commission in September to this end," Mr Dantin said.

Remaining issues, upon which the Irish presidency was not willing to negotiate, will be addressed once the EU's long-term budget for 2014-2020 is agreed. They include caps on direct payments to big farms, distributing EU funds more fairly among farmers in different member states and transferring money to and from national budgets for direct payments to rural development programmes.

The Agriculture Committee will vote on the full package of new CAP regulations once EU's long-term budget negotiations are completed. The package has to be approved by both the committee and the full House before it can be submitted to the Council, which must also approve the agreed texts before they can enter into force.