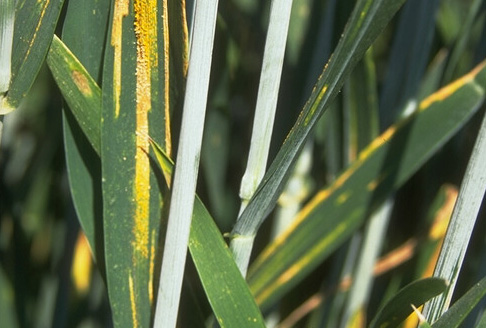 Many cereal crops could be facing a yellow rust epidemic this spring unless early action is taken, according to leading agronomists Hutchinsons.

The disease has thrived due largely to a relatively mild winter combined with a large area of susceptible varieties in the ground nationally, says the firm’s technical manager Dick Neale.

“The writing’s on the wall this season. There are already some heavy yellow rust infections out there and where the disease is not obviously identified in a crop the inoculum is still likely to be present because we haven’t had any hard frosts to knock the disease back.”

More virulent strains of yellow rust also mean it is increasingly not just the classic yellow rust areas around eastern counties and The Wash that are at risk. The disease can be found almost anywhere given the right conditions and in a wider range of varieties, he warns.

“The most common Solstice strain has been around for several years, but it is the stronger Warrior strain that is of more concern now because it survives much better at low and high temperature extremes and mutates every year, so don’t discount any variety from potentially being at risk.”

Forecast colder weather in February could give crops some respite, but it is likely to be too little too late given the level of inoculum present. “We’d need a prolonged period of hard frosts (-8 degrees Celsius or below) to knock the disease back significantly.”

Mr Neale advised growers to monitor all crops for yellow rust from now on, especially susceptible varieties , and not to assume yellow patches are simply due to herbicide damage or nutrient stress.

“History tells us that official disease ratings can quickly change from one season to the next, so don’t discount any variety from being affected by yellow rust. Where you think there is a problem the key is to intervene early,” he says.

In most cases the main control will come from the growth stage 30-31 (T0) fungicide, but there may be a case to treat high-risk crops earlier than this with a fast-moving rust-active triazole from February onwards, he says. “If you can get on early then it is possible to take quite a lot of disease out with a relatively low, cost-effective dose. For example, about a half-rate of cyproconazole or tebuconazole can deliver good results.”

A strobilurin should be included at T0 and possibly again at T1 if yellow rust is still a threat, he adds.

“Yellow rust has the potential to be a devastating disease if you don’t get on top of it early. That was clearly illustrated in 2012, which was the only year we have seen zero yield from untreated trial plots and that was all due to yellow rust in susceptible varieties.”

“The yellow patches initially looked like herbicide effect, but on closer inspection we soon realised it was yellow rust. A lot of the land around here gets affected by sea mists and increased humidity, while there are also a lot of higher yielding susceptible varieties in the ground where disease can get a foothold.”

Spraying early on heavily affected crops proved to be a worthwhile investment.

“Disease pressure remains in lots of crops, although over the Christmas period we did not see an explosion of disease despite the continued mild weather,” he notes. “But we’re monitoring the situation very closely and will go with a T0 of tebuconazole or cyproconazole where it is needed, although hopefully a prolonged cold snap could reduce pressure significantly.

“Yellow rust is not so hard to eradicate providing you get it early and don’t let the disease get established.”