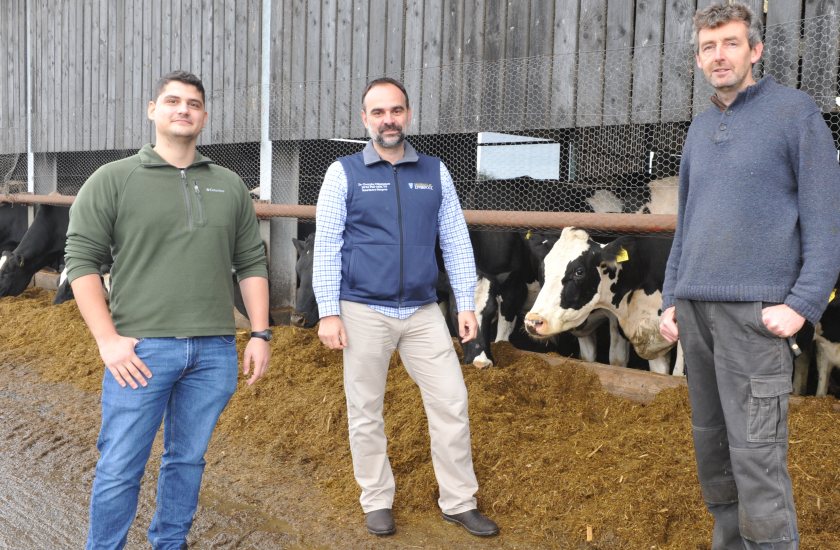 Erw Fawr, a dairy farm near Holyhead, has been trialling a new digital system to detect early stage lameness
Sign in to add your own press release SIGN IN Register

Using technology to detect lameness at an early stage has reduced the number of cows with severely impaired mobility by 75% at a Welsh dairy farm.

Erw Fawr, near Holyhead, has been trialling a new digital system that uses an algorithm to analyse video sequences of cows walking, and extracts information from them.

CCTV scans cows as they walk underneath it and the CattleEye software picks out key points on the cow to provide a mobility score, building up a profile of how the cow is walking.

Basic security cameras can be linked to the internet to assess the welfare and performance of the herd without additional hardware such as cow collars or pedometers.

As soon as the system notices a change in mobility, this is flagged up.

At Erw Fawr, this has given farmer Ceredig Evans the opportunity to treat before a case becomes chronic among his herd of 300 high-yielding Holsteins.

Cattle lameness expert, Professor George Oikonomou, of University of Liverpool, has been independently evaluating how the technology has performed at Erw Fawr on behalf of Farming Connect.

He shared his findings with farmers during a recent Farming Connect open day at Erw Fawr.

At the start of the trial in April 2021, cows were scored by human eye using the AHDB scoring system; 25.4% had mobility issues, with 5.9% at score 3, which indicates severely impaired mobility.

Importantly, all validation mobility scoring throughout the project was conducted by the same person.

In the intervening six months, CattleEye monitored cow mobility at the farm; the information was relayed to Professor Oikonomou and his assistant, Alkiviadis Anagnostopoulos.

Mr Evans was provided with lists of cows to assess and those due for their early lactation or pre-drying off routine trims.

Prior to the start of the project there had been monthly visits by foot trimmers Paul and Jack Nettleton, but Mr Evans increased this to twice a month to make better use of the information provided by CattleEye and the University of Liverpool.

Mr Evans said he was delighted with how the system had performed, picking up foot lesions that he would not otherwise have spotted. It also removed the physical job of scoring.

He said lameness was an issue that the dairy industry needed to address, not only for improved cow welfare and to satisfy milk buyers, but to make the farm business stronger.

“I always say that if cows have healthy feet and a healthy udder, everything else comes together," Mr Evans said.

"From a farmer and a milk contract point of view, it is important, but from an economic one, it makes sense to have healthier cows.

"Every job needs time and effort and to have technology that does the job for you means it gets done.’’

One of the biggest issues with preventing lameness is early detection. Cattle Eye demonstrated it was possible to pick up cases before they advanced, said Professor Oikonomou.

“We know from research with farmers that often their perception of a lame cow is one that stays behind, that can’t keep up with the rest of the herd," he added.

"But a lot of cows will have early stages of lameness that will not been seen unless you are mobility-scoring them. CattleEye is possibly one of the ways to address that issue"

The project was facilitated by Rhys Davies, Farming Connect’s dairy technical officer in North Wales, who believes the system has the potential to deliver a positive outcome for the dairy industry.

“This is one of the most promising projects we have worked on," said Mr Davies.